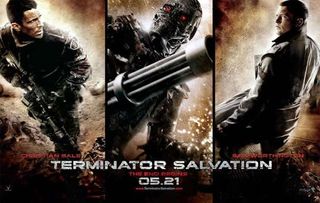 The movie "Terminator Salvation" tells of the human resistance struggling to defeat Skynet and its robot army.
(Image: © Warner Bros.)

Warning: may include SPOILERS for those who have not watched the trailer.

Hollywood and robotics researchers have long struggled with the "uncanny valley," where a movie character or robot falls into the unsettling gap between human and not-quite-human. One psychologist likes to demonstrate this by holding up a plastic baby doll and asking audiences if they think it's alive. They say no.

Then she takes out a saw and starts cutting the doll's head off, but quickly stops upon seeing the uncomfortable audience reactions.

"I think that part of their brain is thinking the doll is alive, and you can't shut that off," said Thalia Wheatley, a psychologist at Dartmouth College.

Similar sensations abound in the movie "Terminator Salvation," which tells the story of the artificial intelligence Skynet and its army of robots threatening to wipe out humanity in 2018. The uncanny twist comes when Skynet begins disturbing experiments that combine human flesh with robotic strength.

Scientists have begun to understand what happens in the human brain when it encounters the uncanny valley. And like the post-apocalyptic future of "Terminator," it's not pretty — a murky landscape where conflict rages upon confronting a challenge to our human identity.

Robots of earlier "Terminator" movies, such as the famous model played by Arnold Schwarzenegger, walked with the easy confidence of programmed beings. Their apparent inhumanity fed the thrill of terror felt by both human characters and movie audiences.

What the new "Terminator Salvation" suggests is that one of the earliest human-looking terminators had something of an identity crisis, and even bore the human name "Marcus Wright." That robotic delusion lasts until Wright gets captured with a horrific wound that exposes his true self.

"In the instant Marcus stares down at his mechanical torso, his sense of personal and human identity has been knocked out from under him, and that's devastating," said Karl MacDorman, a robotics researcher at Indiana University.

Moviegoers may also find themselves squirming a bit at the sight of a gaping hole in Wright's chest. Such a sight might not disturb so much if Wright looked like a mechanical robot that had merely suffered battle damage.

Yet Wright's human appearance betrays none of the robotic clues seen in the behavior of previous terminators — the emotionless faces, the unwavering movements, and the flat voices.

These moments reveal how the uncanny feeling can come from seeing a "mismatch among the elements" that signify normal human behavior and appearance. The mismatch can even occur for robots that don't necessarily look human, but display other eerily human characteristics.

"If you have a robot that looks very robot-like, you're not so troubled by its jerky motion," MacDorman told LiveScience. "If the robot moved exactly like a human, it might look strange."

A brain warring with itself

That strange sensation can affect people around the simplest of objects, as Wheatley clearly demonstrated with the plastic baby doll. Her lab examines how the uncanny valley might play out as a conflict in the brain.

Some sort of mental disconnect became clear in one of the lab's behavioral studies, where people looked at a gradual morph from a human face to a doll face. People quickly recognized the point where they became uncertain about whether the face was alive or not, when the morph was just 30 percent doll mixed in. However, the point at which they found the morph "creepiest" had much more of the doll face than the human face in the mix.

Wheatley suggests that one part of the mind gets tricked into believing it's seeing a human.

"One brain area likes to look at faces, same in monkeys as in humans — very primitive," Wheatley explained. "It doesn't seem to care so much if it's looking at human or a doll or a drawing; it just sees two eyes, a nose and mouth, and the brain cells fire."

At the same time, Wheatley suspects that the brain's social network regions recognize that the object is not alive. That social network system becomes active whenever the brain tries to understand other people's emotions or mental states, and also detects the biological motion of anything that's alive.

The resulting conflict in the brain sounds mental alarm bells and may create the uneasy feeling that we know as entering the uncanny valley.

"Even though your sophisticated analysis says it's not alive, you still have a primitive part of the brain not getting it," Wheatley said.

Perhaps the greatest surprise about the uncanny valley is the lack of scientific studies supporting it, even though almost four decades have passed since Japanese roboticist Masahiro Mori proposed the idea in 1970.

Wheatley's lab and others have only begun doing preliminary brain scan studies to identify which brain areas light up in response to an uncanny valley moment.

"There's a lot of interest in the uncanny valley, and not a lot of research to back it up," Wheatley said. "We're hoping to fill that void."

Other researchers have also argued that the uncanny valley concept is too simplistic, particularly how it describes a smooth drop-off curve as objects steadily appear more and more human.

"There are some people who say it's simply not true," MacDorman said. "I don't fully agree with that, because I think there's definitely something to the uncanny valley — but there's a problem with a simplistic view of the uncanny valley."

No one knows what it means to have 70 percent or 90 percent human likeness, MacDorman pointed out. Perhaps all the attributes of a robot, ranging from the eyes to body movement to voice tone, might have 90 percent resemblance to human characteristics.

Or a robot could be 99 percent perfect, except for a delayed reaction time during conversations with humans. That could still trigger the uncanny valley sensation in observers who would quickly conclude that the robot was retarded, if not — gasp — non-human.

If scientists still have not gotten a handle on the uncanny valley, at least everyone can experience it for themselves at the movies. Some filmmakers may run into the phenomenon accidentally by trying to create that perfect CGI character in "The Polar Express" or "Beowulf," MacDorman noted. Other movies, such as "Terminator," embrace the uncanny valley for the questions it raises about the human identity.

"In the scene of 'Terminator Salvation' when the Marcus Wright character discovers himself to be a terminator, the source of his horror — and ours — is not any defect in animation," MacDorman said.