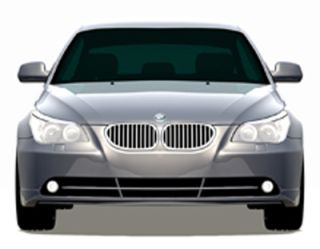 People see faces in cars, and they like this mug of an image model of the BMW 5 Series that used in the study. The BMW ranked high on the "power" scale.
(Image: © BMW/Truls Thorstensen)

If a Toyota Prius just looks too friendly for your tastes, you’re not alone. People readily see faces and traits in cars, and a new study suggests that they prefer cars to appear dominant, masculine and angry.

The finding rests on the propensity we have to actually see faces or human characteristics in everything from cars to clouds, a phenomenon called pareidolia. But now researchers hope to better understand what goes on in the brain when people see faces in objects versus humans faces, as well as help automakers design more appealing cars.

"When investing in a new passenger car, you're talking about billions," said Truls Thorstensen, head of EFS Consulting Vienna. "If you get the wrong styling, you get problems."

However, designing car appearance has not proven an exact science. Style and design experts give their advice, and even CEOs weigh in with their preferences, Thorstensen told LiveScience. He wanted to find a better tool for automakers to assess car styles.

For this, Thorstensen enlisted his own group of experts that included Sonja Windhager, an anthropologist at the University of Vienna. They asked 20 males and 20 females to rate 38 passenger car models which came out between 2004 and 2006.

Study participants assessed cars based on a system known as geometric morphometrics (GM), which allowed the men and women to rate certain traits on a sliding scale (such as "infancy" to "adulthood"). The traits represented maturity, sex, attitudes, emotions, and personality — all things that people infer from human faces at a single glance.

After rating car traits, participants then answered the question of whether they saw a human face, animal face or no face at all on the cars. They drew facial features such as eyes, nose and mouth on the car images whenever they did see faces.

Lastly, the study participants answered whether they liked a car or not. The study restricted car choices to passenger cars, because hulking SUVs would have skewed the results.

People overwhelmingly preferred cars that rated highest on "power" traits." High "power" cars like the BMW 5 Series tended to be lower or wider, and have slit-like or angled headlights with a wider air intake.

The participants also largely agreed on which cars had which traits, such as arrogant, afraid and agreeable. A few traits such as disgusted, extroverted and sad caused more disagreement.

Such results spurred interest even several years ago, when a head designer with a leading car manufacturer wanted to buy the study outright. But Thorstensen and Windhager are already looking to another study that adds eye-tracking and brain activity monitoring.

"These questionnaires are limited in the things you can infer from them," Windhager noted. "You have to ask people, and they have to reflect on them. We wanted to go to more subconscious level."

They also want to conduct research using people in Ethiopia who don't have familiarity with modern car models, and eventually extend their research across other countries. Thorstensen pointed out that some automakers such as Toyota already tailor certain car model appearances to different countries and cultures.

"I don't think this is something that will change the industry or make the designers jobless," Thorstensen said, adding that the work was just one more step toward a better standardized design tool.