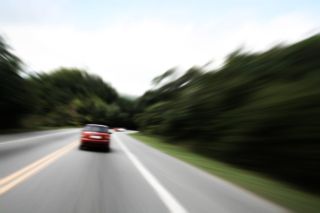 By taking it easy on the gas pedal and brakes, hypermilers achieve gas mileage feats far beyond the fuel economy ratings given to cars by the Environmental Protection Agency. They coast to stop signs, accelerate slowly, and sometimes raise the ire of other drivers.
(Image: © stock.xchng)

Some days on her morning commute, Rani Cardona feels like the stars are aligned. With the green lights timed just right, and a slight tail wind at her back, her Honda Civic Hybrid can really fly. On fumes.

"When you see the gauge springing up toward 100 miles per gallon and you’ve got your foot just perfectly situated and you hold it there, you know, it's just a great feeling," she said. "It's an indescribable feeling, like your car is almost defying the laws of physics and you're just kind of floating on air."

Cardona, an engineer in the Los Angeles area, is a hypermiler. She is part of a community of drivers who devote themselves to squeezing every last mile out of a gallon of gas.

With gasoline prices sky high, and global warming fears on everyone's minds, fuel efficiency is an increasingly popular notion. But few drivers know what a difference their driving habits can make, and few take the challenge as seriously as hypermilers.

The term "hypermiling" was coined in 2004 by Wayne Gerdes, who started the Web site CleanMPG.com, which has become a hub for fuel efficiency enthusiasts.

"The day after 9/11, I began changing my habits for the better and ever since then I've looked for methods to improve fuel economy," Gerdes told LiveScience. "We all have our trigger points — mine was global security. It doesn't matter if you're concerned with global warming, or smog, or government debt, or if you're worried about putting money in your pocketbook. All those reasons are good reasons to become a hypermiler."

In recent years the movement has been growing at breakneck pace, though enthusiasts may call themselves by different names and congregate in various online and real-world communities. CleanMPG is certainly booming.

"We have well over 6,000 registered members worldwide," said the site's Canadian representative Manuel Santos. "From what we see in terms of response and activity on the Web, we suspect there may be many hundreds of thousands out there. The movement's been growing, gathering a lot of momentum, and there is a large pool of folks out there who use some of these techniques."

So how does one achieve these feats of mileage?

The core of the hypermiler's philosophy is to use both the gas pedal and the brakes as little as possible. Since every time you hit the gas, you're using fuel, and every time you brake, you're basically throwing that fuel away, the less either comes into play, the more gas you save.

"It sounds paradoxical because the accelerator and the brake are the two main features of your car," Cardona said. "But not speeding up to those red lights and not taking off like a jackrabbit at a green light can really add up at the gas pump."

So when hypermilers see a red light ahead, they'll take their foot off the gas and coast toward it. And they constantly scan far ahead for possible impediments so they don't waste gas getting to them, just to have to brake when they get close.

Hypermilers also pride themselves on driving at or below the speed limit, since the faster you drive, the more gasoline it takes to maintain momentum and get back up to speed every time you slow down. And wind resistance becomes a bigger problem the faster you go.

Some of their habits — such as driving around 50 to 55 mph on the highway and drifting up to red lights at a crawl — have earned hypermilers a few enemies on the road. Gerdes is used to the abuse.

"If there are five or six cars behind me coming into a red light and I can save all six of those from speeding to it, I have no problem taking a finger or a horn for that action," he said. "I'm going to save everybody fuel and make them safer."

Gerdes also recommends filling tires to the maximum safe pressure listed on them by their manufacturer, and using the lowest weight oil appropriate to a certain vehicle. And all hypermilers rave about using fuel consumption display devices. While these gauges come with hybrid vehicles, similar gadgets (a ScanGauge, for example) can be installed on most other cars, and allow a driver to see instantaneous changes in miles per gallon.

"This is the single most important step that the average driver can take," Santos said. "When they press the gas pedal they will see instantaneously what fuel they're requiring at the time. That little device pays for itself in no time. It's like weight loss. If you don’t have a scale and are involved in a diet program you really don’t have the means of gauging your progress."

And then there are the more extreme techniques, such as turning off the car's engine during particularly long stoplights or while coasting down hills. This method has been criticized by many, including the American Automobile Association (AAA), as unsafe.

"These practices can put motorists in a treacherous situation where they could lose power steering and brakes or be unable to react to quickly changing traffic conditions," said Marshall L. Doney, AAA Automotive vice president.

But hypermilers insist it isn't dangerous when done by drivers who know what they're doing.

"Turning the engine off while the vehicle is moving is an advanced technique, it's not something for the average person to use," Santos said. "The hybrid vehicles that we currently have on the road today do that already. We do say to check with your dealership to make sure it's safe in your vehicle, and check to see if it's legal in your region."

Hypermilers have also been accused of rolling through stoplights and riding closely behind big trucks to take advantage of the wind buffer (called "drafting").

While these techniques can save gas, they are not officially condoned by CleanMPG or mainstream hypermilers.

"Drafting is not worth the risk," Santos said. "We certainly do not endorse that. We are appalled that that is associated with hypermiling."

Hypermilers resent being pinned with accusations of reckless driving. By obeying speed limits and maintaining vigilant awareness of their surroundings, they say they're actually the safest drivers around.

"You're driving with all your senses fully alert — you're hearing, you're seeing, you're watching, your radar is constantly twirling 360 degrees to see what situation is going to come up that I need to anticipate," Cardona said. "You'll never see one of us gabbing or putting on makeup."

"There are a lot of folks who call themselves hypermilers, but unfortunately they give mainstream hypermilers a very bad name," Santos said. "We try to tell them to cease promoting unsafe techniques. A good hypermiler will always be a safe driver."

A similar movement to hypermiling, but with somewhat of a different focus, is a practice called ecodriving.

"At one time, 'ecodriver' and 'hypermiler' were interchangeable terms," said Hilary Evans, who writes for the Web site EcoFriendlyDriver.com. "I still think most hypermilers are concerned with the environment, but not all eco-friendly drivers focus on getting the most miles per gallon."

Since these drivers prioritize limiting the environmental impact of their driving, they take a slightly different approach. Ecodriving involves driving at steady speeds in the highest gear possible, decelerating smoothly and anticipating traffic flow, all with the goals of reducing fuel consumption and greenhouse gas emissions.

Ecodriving is popular in Europe, and several European countries have even funded programs to get regular people to change their habits to save gas and cut down on carbon dioxide emissions.

"European governments have been very active in promoting fuel economy," said Santos. "They have smaller vehicles on their streets. In terms of average efficiency they are definitely way ahead of us."

Hypermilers say the U.S. government could do a lot of good by teaching the public some of the tricks they've figured out.

"It would be good to have governments focusing more on promoting safe and fuel-efficient driving techniques for the public to follow," Santos said. "Even having the DMV include ecodriving and hypermiling as part of driver's-ed may make people more aware of ways to minimize the pain at the pump."

In the meantime, hypermilers aren't waiting for governments or the auto industry to take a stand. Every time they get behind the wheel they're making a choice to change what they see as irresponsible habits.

"I want to make this small effort of my own," Cardona said. "It may not mean much in the whole macro scheme of things, but it's having an effect where I live and in my life. I see it as a positive thing and it does rub off on others."