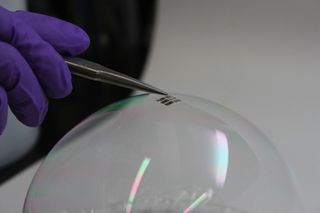 MIT researchers created solar cells that are so thin and light that they can be draped on top of a soap bubble, without popping the bubble.
(Image: © Joel Jean and Anna Osherov)

Scientists have created the thinnest, lightest solar power cells yet — so lightweight that they can be draped on top of a soap bubble without popping it.

The researchers suggested that these ultrathin solar cells could be placed on almost any solid surface, including fabric, paper and glass.

Solar cells, technically known as photovoltaic cells, directly convert energy from light into electricity. The new solar cells are as small as 1.3 microns thick. In comparison, the average human hair is about 100 microns thick.

The new devices are also superlightweight, weighing only about 0.01 lbs. per square yard (3.6 grams per square meter). In comparison, typical piece of office paper weighs about 20 times more. [Top 10 Inventions That Changed the World]

The idea to drape a solar cell on top of a soap bubble came because "we wanted people to see how thin this solar cell was, but you can't tell the difference between a 10-micron and a 1-micron film by eye," said study lead author Joel Jean, an electrical engineer at the Massachusetts Institute of Technology (MIT). "My lab mate Patrick Brown suggested floating the cell on a bubble to make the weight difference much more dramatic, so I tried it. My first reaction to seeing it was probably a lot like yours — 'Cool!'"

The new solar cells convert light to electricity with about the same efficiency as conventional, glass-based solar cells, the researchers said. "It's unusual for flexible cells to perform as well as rigid cells on glass," Jean told Live Science.

In addition, the power-to-weight ratio of the new devices is among the highest ever achieved for solar cells. This is key to applications in which weight is important, such as on spacecraft or on high-altitude research balloons, the researchers said.

Conventional silicon-based solar modules produce about 6.8 watts per lb. (15 watts per kilogram), but these new devices can generate more than 2,720 watts per lb. (6 watts per gram), or about 400 times as much.

"It could be so light that you don't even know it's there, on your shirt or on your notebook," study senior author Vladimir Bulović, an electrical engineer at MIT, said in a statement. "These cells could simply be an add-on to existing structures."

The new cells use an organic compound known as DBP as their primary light-absorbing material. The solar cells are sandwiched between layers of parylene, a commercially available, flexible, transparent plastic that is widely used to protect circuit boards and implanted biomedical devices from environmental damage.

The solar cells and their parylene supports and coatings are fabricated in a vacuum chamber at room temperature without the use of any solvents, the scientists said. In contrast, conventional solar-cell manufacturing requires high temperatures and harsh chemicals. [Top 10 Craziest Environmental Ideas]

The solar cells and the parylene are grown together. The parylene never needs to be handled, cleaned or removed from the vacuum during fabrication, which minimizes exposure to dust and other contaminants that could degrade the performance of the solar cells, according to the researchers.

The scientists acknowledged that the solar cell they created to sit atop a soap bubble might be too thin to be practical — an errant breath could blow it away, they said. "It's, of course, just for show, but we think it makes for a good show," Jean said.

The researchers noted they could easily fabricate parylene films up to 80 microns thick using commercial equipment without losing the other benefits of their manufacturing technique.

"Using this approach, you could imagine laminating lightweight or even invisible solar cells onto windows or other solid surfaces for building- and device-integrated electronics," Jean said. "A more robust consumer product might use these cells laminated onto a conventional flexible plastic sheet, which you could carry around with you for portable power."

The researchers noted their fabrication technique can use a variety of photovoltaic materials beyond the ones they have demonstrated so far. "A more efficient photovoltaic technology could reach even higher power-to-weight ratios than the 6 watts per gram that we showed in this first demonstration," Jean said.

The MIT team's ultrathin solar cells are almost an order of magnitude thinner and lighter than the previous record holder, said Max Shtein, a materials scientist at the University of Michigan at Ann Arbor, who was not involved in this work, said in a statement. As a result, he noted that this research "has tremendous implications for maximizing power-to-weight [ratios] — important for aerospace applications, for example — and for the ability to simply laminate photovoltaic cells onto existing structures."

It's not yet known when these solar cells might be commercially available, "but a general rule of thumb is that it takes a decade for a technology to go from research lab to market," Jean said. Some of the main challenges in scaling up this approach for commercial use might include developing an integrated system for high-throughput manufacturing — for example, roll-to-roll processing — increasing the deposition speed, and identifying applications where an ultralight and flexible cell would provide some unique value to the user."

Jean, Bulović and their colleague Annie Wang, also at MIT, detailed their findings in the April issue of the journal Organic Electronics.