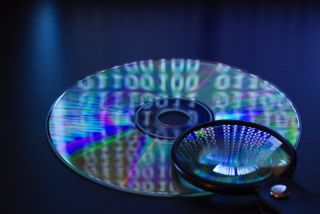 Solar cells rely on materials that convert photons of light into electricity. Prior research had revealed that if microscopic structures that are only nanometers (billionths of a meter) high are placed on the surface of solar cells, they can scatter light in ways that increase the cells' efficiency.

"For solar cell applications, we want to enhance light absorption over the entire solar spectrum — wavelengths from about 350 nanometers to 2,300 nanometers," said study co-author Jiaxing Huang, a materials scientist at Northwestern University in Evanston, Illinois.

Blu-ray discs can hold more data than CDs or DVDs can. They encode data using microscopic pits only 25 to 30 nanometers deep and 75 nanometers long. These pits, and the islands between them, together represent the 0s and 1s of binary code that computers use to symbolize information.

The researchers used a Blu-ray of "Police Story 3: Supercop," starring Jackie Chan, to create a mold for a quasi-random surface texture that they placed on a solar cell. They found that this pattern boosted light absorption significantly — by 21.8 percent over the entire solar spectrum, more so than either a random pattern or no pattern.

"The big surprise is that the pattern worked so well," Huang told Live Science.

In tests of a wide range of movies and television shows, the researchers found that it didn't matter which video content was on the Blu-ray discs; they all worked equally well to enhance the light absorption in the solar cells. Instead, the secret lies in the algorithms used to encode data on Blu-rays, which turn data into quasi-random patterns that are "surprisingly well-suited for light-trapping over the solar spectrum," Huang said.

The scientists detailed their findings online today (Nov. 25) in the journal Nature Communications.