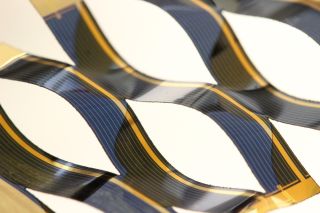 An up-close look at the thin-film solar cells on the kirigami structure.
(Image: © Aaron Lamoureux – University of Michigan )

Japanese paper art is typically used to create dainty folded cranes and paper snowflakes, but now, researchers are using it to inspire innovations in the energy world.

Scientists from the University of Michigan at Ann Arbor (UM) have used the ancient art of paper cutting, known as kirigami, to create a unique thin-film solar cell that can use a method of following the sun called optical tracking. These movements allow the cell to absorb more energy from the sun throughout the day.

The idea was initially hatched by Matt Shlian, one of the authors of the new study and a professor in the University of Michigan's School of Art and Design. Shlian had been experimenting with ways to incorporate kirigami and origami in the design for new technologies. [Top 10 Inventions That Changed the World]

"The problem of tracking the sun has been there for years and years," said study lead author Max Shtein, a professor in UM's Department of Materials Science and Engineering. "There are lots of ways that involve motors and gears. [This design is] meant to be lighter and more elegant."

The new kirigami-inspired solar cell uses a bending motion to change the angle of its surface. To achieve this, the structure is slowly stretched out using a small, motorized mechanism. Strategically placed cuts in the material make it possible for an object that is normally rigid to stretch and bend.

"If you begin to stretch things, you can deform things in this particular way," Shtein told Live Science.

The base of the solar cell has a fairly simple kirigami structure of lines cut into Kapton, a polyimide film that is flexible and remains stable across a wide range of temperatures (from minus 452 degrees Fahrenheit to 752 degrees Fahrenheit, or minus 269 degrees Celsius to 400 degrees Celsius). The structure of the design put a series of short parallel cuts in the polyimide film that were slightly out of alignment so that the top of one cut would be several inches below the top of the other or several inches above them.

Kyusang Lee, a student in the Department of Electrical Engineering and Computer Science, and Aaron Lamoureux, a student in the Department of Materials Science and Engineering, collaborated on a way to construct the material. Their method cold-welds (fuses together without heat) the top of the metalized surface of the semiconductor to the metalized surface of the Kapton sheet, which acts as a backing for the photovoltaic cells. Both the Kapton sheet and the photovoltaic cell were cut into the simple kirigami pattern, because they both need to have the same base structure when they are stuck together with atomic bonds of the metal.

This type of design is less clunky and offers a more cost-effective way to do optical tracking than traditional solar panels that have to be attached to large motors to move the much heavier panels with the sun the researchers said. The kirigami-inspired solar cell can also increase energy generation by between 20 and 40 percent, they said.

"The idea is to spend less money and get as much energy as you would before," Shtein said, "or spend the same amount of money and get more energy."

The researchers are hopeful they will be able to market their newly designed solar cell in the near future, but this art-inspired innovation has the potential for a wide range of applications, the scientists said. Shtein added that he and his colleagues are looking into applications for these types of designs in filtering and electromagnetic devices, such as radio technology, and in acoustics tools, such as tuning devices.

The detailed findings of the study were published Sept. 8 in the journal Nature Communications.