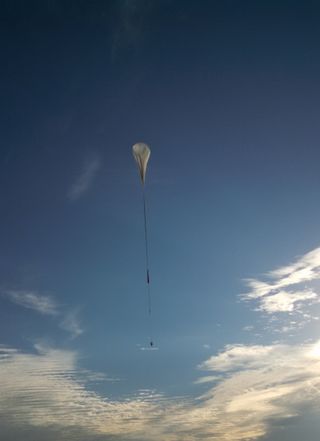 Eerie sounds from the edge of space were recorded for the first time in 50 years aboard a NASA student balloon experiment.

Infrasound microphones captured the mysterious hisses and whistles 22 miles (36 kilometers) above the Earth's surface last year. Daniel Bowman, a graduate student at the University of North Carolina at Chapel Hill, designed and built the equipment. The instruments eavesdropped on atmospheric infrasound, or sound waves at frequencies below 20 hertz. Infrasound is below human hearing range, but speeding up the recordings makes them audible.

The infrasound sensors were dangling from a helium balloon that flew above New Mexico and Arizona on Aug. 9, 2014. The experiment was one of 10 payloads flown last year on the High Altitude Student Platform (HASP). The high-altitude balloon flight is an annual project conducted by NASA and the Louisiana Space Consortium that is meant to spark student interest in space research. Since 2006, HASP has launched more than 70 experiments designed by college students across the United States.

During the 9-hour flight, the balloon and its payloads floated some 450 miles (725 km) and reached a height of more than 123,000 feet (37,500 meters). This is a region of near space — above where airplanes fly, but below the boundary marking the top of the stratosphere, 62 miles (100 km) above the Earth's surface.

No infrasound experiment has ever reached such high altitudes, Bowman said. (Interest in atmospheric infrasound peaked in the 1960s as a way to detect nuclear explosions, but then died off as scientists switched to ground-based sensors.)

As the HASP balloon drifted over New Mexico, the infrasound sensors picked up a knotty mix of signals that the scientists are working to interpret, Bowman reported April 23 at the annual meeting of the Seismological Society of America in Pasadena, California. The researchers had never "heard" many of the stratospheric signals.

Here are some of their guesses so far: There were signals from a wind farm under the balloon's flight path, crashing ocean waves, wind turbulence, gravity waves, clear air turbulence, and vibrations caused by the balloon cable. The scientists have another payload planned for the 2015 HASP balloon launch, which could help reveal more about strange infrasound sources.

"I was surprised by the sheer complexity of the signal," Bowman said. "I expected to see a few little stripes."

Bowman, who has been building and launching his own high-altitude balloons since high school, hopes that his experiment will revive interest in atmospheric infrasound. "There haven't been acoustic recordings in the stratosphere for 50 years. Surely, if we place instruments up there, we will find things we haven't seen before," he said.

Scientists have even proposed sending infrasound sensors to Mars and Venus, where the microphones could detect unusual weather or earthquakes.

"I think this work has opened new ground for more research," Marcillo said. "It's very important for the entire [infrasound] community."