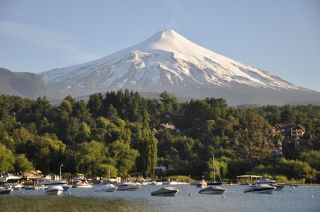 Chile's Villarrica volcano is one of the country's most active volcanoes. Its summit is 9,340 feet (2,847 meters) high.
(Image: © Jeff Johnson, Boise State University)

The active volcano's churning lava lake constantly rumbles, said Jeff Johnson, a volcanologist at Boise State University in Idaho. At deeper frequencies — the kinds that rattle human nerves but are below hearing range — Villarrica is also a prodigious source of infrasound, Johnson said.

"If it was in hearing range, it would be about 160 decibels. It would blow your eardrums," he told OurAmazingPlanet. ['Hear' Villarica's Infrasound]

Now, Johnson and his colleagues are looking to this powerful infrasound source for new ways to monitor the weather. The researchers can extract wind speed and direction from infrasound, Johnson reported here yesterday (April 17) at the Seismological Society of America's annual meeting. Scientists can calculate that wind data by looking at the infrasound's travel speed and the local air temperature.

Villarrica's sound has been measured at least 30 miles (50 kilometers) from the stratovolcano's steep-sided cone, but researchers set sensors at a distance of 5 miles (8 km) for the study.

The volcano's sonorous tone revealed strong winds blowing west-northwest during the study period. While no local weather stations were available to corroborate the measurements, Johnson noted that gusting west-northwest winds prevented the research team from climbing Villarrica on at least one day.

Since 2002, Johnson and his colleagues have monitored the volcano's infrasound to better understand the open, lava-filled vent and help forecast eruptions. Villarrica's lava lake overflowed in 1984, sending a lahar, or slurry of melted snow and ice, tearing down the volcano's slopes and destroying a bridge.

"The infrasound is continuous. It's intense, it's spectacular, and I'm interested in understanding why a volcano produces this kind of sound," Johnson said.

Infrasound weather-monitoring is a growing area in seismology. Scientists also described infrasound detection of thunderstorms and high-altitude winds yesterday at the meeting. Johnson compares probing the atmosphere using infrasound to visualizing structures inside the Earth using seismic waves, which seismologists also do.

"We are developing tools that will allow us to do meteorology with sound," Johnson said.

Johnson plans to return to Villarrica with 50 infrasound sensors for another study of the atmosphere, this one lasting six months.