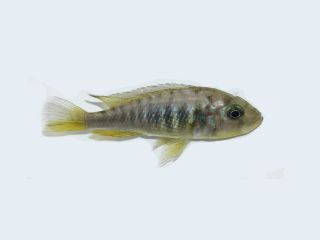 A hybrid female cichlid was found to have developed male sex organs and was able to self-fertilize, producing dozens of offspring.
(Image: © Alan Smith)

Frequently, scientific discoveries are accompanied not by a cry of "Eureka!" but rather a puzzled "Well, that's weird."

Take what happened to a group of researchers who were crossbreeding different species of cichlids — a type of freshwater fish — to learn about their genetics. To the researchers' surprise, they found an unexpected and unusual development in one of the hybrid females. While her sex organs contained normal ovaries, they also held what appeared to be spermatocytes — the cells that produce sperm — enabling her to self-fertilize her eggs and produce offspring without a mate.

Naturally, they decided to call her "Mary."

The self-fertilizing fish produced 14 broods with a total of 46 offspring, of which 15 daughters and two sons survived to adulthood and produced offspring of their own. However, none of the offspring shared their mother's unusual reproductive ability, the researchers found. [Why Do We Have Sex?]

While most vertebrates (animals with backbones) reproduce primarily through males fertilizing females' eggs, reproduction without male intervention has been known to occur. Some lizards — including the Komodo dragon, certain sharks and pit vipers — have been observed reproducing by a process called parthenogenesis, when offspring develop without fertilization.

But self-fertilization — or "selfing," as the scientists called it in their study — is different from parthenogenesis in that it involves fertilization. Selfing is extremely rare in vertebrates. For it to happen, the parent must be intersex, meaning it has both male and female sex organs, so that it can perform not only egg production but also fertilization.

The scientists' discovery of the intersex fish happened "by pure accident," said study co-author Cock van Oosterhout, a professor of evolutionary genetics at the University of East Anglia in the United Kingdom. They noticed the selfing behavior in one of their hybrid females because they had isolated her — and several other females — before the fish reached sexual maturity, he told Live Science in an email.

The scientists suspected that something peculiar was happening when they observed that the fish was brooding eggs in her mouth, said study co-author Ola Svensson, a zoologist in the Department of Biological and Environmental Sciences at the University of Gothenburg in Sweden.

"We knew that there was no way another fish could have fertilized the eggs," Svensson said. Though at first they thought she was reproducing by parthenogenesis, DNA analysis confirmed that the little fish was both mother and father to her offspring, he added.

It might seem advantageous for a fish to be able to fertilize her own eggs. But perhaps in situations where mates are scarce, the advantage also carries a genetic cost, resulting in inbred offspring that would likely be less fit, van Oosterhout said.

"We believe that this may be the reason why selfing vertebrate species are exceptionally rare in nature," van Oosterhout said.

Van Oosterhout also suggested the possibility that other intersex fish could have emerged from crossbreeding in the lab environment but that the researchers might not have noticed. "Because fish are rarely isolated and so closely observed, scientists may simply not have spotted it before," he said.

The findings were published online March 23 in the journal Royal Society Open Science.