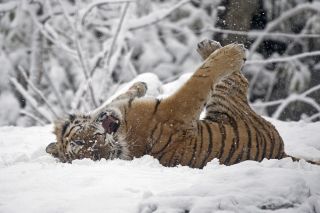 Tigers love the snow and are perfectly equipped to live in the cold.
(Image: © Julie Larsen Maher/Copyright WCS)

Winter wildlife watching is at its best and most beautiful when temperatures fall, bringing snow.

Big cats like Amur tigers and snow leopards are well-adapted to the cold. They are specially winterized, with coats that become more soft and dense with the change in weather. Large paws covered in extra fur help them cross ground that's carpeted in snow. Snowy owls and Reeves's pheasants tolerate both hot and cold weather. Thick feathers insulate them from harsh conditions. Fowl — like ducks, geese and swans — wear their brightest plumage during the winter months. Other birds boast white feathers that are the color of the season, which serve as camouflage in snowy environments. Coyotes and bears revel in freshly fallen snow. Their tracks, trails and tunnels are all signs of the winter ways of wildlife.

The Wildlife Conservation Society's goal is to conserve the world's largest wild places, focusing in 15 priority regions that are home to more than 50 percent of the world's biodiversity. Many animals from around the globe live at WCS's five wildlife parks in New York, in all the seasons, including winter. (Credit: Julie Larsen Maher/Copyright WCS)

There's something magical about snow leopards. WCS's legendary conservationist George Schaller hints at it in his book, "Stones of Silence," when he describes a memorable encounter in the hills of Pakistan in the 1970s. While hiking, he spotted the big cat roughly 150 feet away. "Though snow soon capped her head and shoulders," he wrote, "she remained, silent and still, seemingly impervious to the elements. Wisps of clouds swirled around, transforming her into a ghost creature, part myth and part reality."

Not surprisingly, given its name, the snowy owl is well-adapted to wintry conditions . It's known to summer far north of the Arctic Circle. And unlike most owls, which hunt at night, the snowy owl is active during the day — a necessary adaption in a place where the sun sometimes doesn't go down at all. Come winter, the bird moves south, occasionally as far as the southern United States.

In the wild, these bears hibernate in winter. They'll often set up a den — perhaps along a sheltered slope, under a large rock or between the roots of a large tree — and return to it each year. Female grizzlies typically give birth to two cubs in January or February. The newborns are blind, hairless and tiny, weighing less than a lb. They stay in the safe surroundings of the den until springtime, by which time they've grown to about 20 lbs.

Tall and regal, white-naped cranes are migratory birds found in Russia, China, Mongolia, and North and South Korea. They are considered a conservation priority for WCS's program in Mongolia, where the birds face serious threats that include agricultural development and habitat loss through the drying of wetlands due to climate change.

Earlier this year, word spread online about Zolushka, an orphaned Amur tiger that was nursed back to health by conservationists in Russia before being returned to the wild. Thanks to photographs from camera traps in the field, we now know she has two cubs of her own. This is particularly welcome news, because there are only some 350 to 400 Amur tigers left in the wild, almost exclusively in the Russian Far East, where they endure cold winters. Researchers have identified the distribution of prey species as the most important factor in determining the tigers' geographic distribution.

Next to humans, no primate lives as far north as these animals do in Japan. They endure the cold, snowy winters by soaking in natural hot springs, and they take refuge from the summer heat by plunging into cold pools. Also a bit like humans, they're social. They live in big troops, averaging 40 to 200 individuals, can make up to 30 vocalizations, and use body and facial expressions.

Normally associated with the warm weather of the African savanna, our Bronx Zoo lions also enjoy an occasional romp during a snowfall. Male lions grow a thick frame of hair around their heads called a mane that begins in "Mohawk" style, like those of these two juveniles.

Coyotes can live year-round in places with changing seasons. Their tracks can be seen in the snow near their woodland homes. These canids mate for life and females give birth as winter ends. Litters ranging from four to six pups are born in dens, where they stay until they are about seven weeks old.

Primarily a bamboo eater, this charismatic mammal is covered in fur the color of cinnamon, which keeps it warm in cooler climates. Found in parts of Asia, red pandas are losing ground due to their specific habitat needs for their food staple, bamboo, that grows in areas becoming more and more disturbed by human activity.

Males of this large pheasant species are stunning in the snow. At nearly 8 feet, they have the longest tail feathers of any bird. Their elegant feathers were once coveted for costume decoration, but now these birds' main threat is the continued deforestation that is fragmenting their habitat.

See more of Julie's conservation photos and stories on Wild View, and learn more about the animal kingdom at Wildcards.