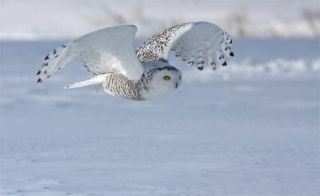 Hedwig's cousin? A snowy owl glides over a northern landscape. Unlike many owls, snowy owls are active during the day.
(Image: © dreamstime.)

The visitors from the Arctic have shown up as far south as North Carolina, on the island of Bermuda and in unusually large numbers in the Northeast and around the Great Lakes. Yesterday (Dec. 5), 15 were counted at Logan Airport in Boston.

For reasons no one understands, snowy owl sightings are spiking in eastern North America this winter.

"Maybe this is starting to shape up to be an irruption year," said Denver Holt, founder of the Owl Research Institute in Montana. 'Irruption' refers to the unpredictable migrations the birds make.

This wouldn't be the first snowy owl irruption in recent memory; it would be the third. Two years ago, the birds showed up in unusually high numbers from east to west across the continent. One was even spotted in Hawaii for the first time. The following year’s snowy owl irruption was less widespread and more directional, with birds showing up in the northern Great Plains, northern Rockies and the Pacific Northwest, according to the Audubon Society’s Christmas Bird Count. This year, owls appear to be drawn to another part of the continent.

In the central plains of North America, some owls, particularly young ones, appear to show up regularly. Likewise, most of the birds that arrive during an unpredictable irruption are young ones that hatched over the summer, Holt said.

Historically, people have thought the owls flew south because they weren't able to find food up north, but this does not appear to be the case, said Norman Smith, who catches and relocates snowy owls attracted to the tundralike expanse of Logan Airport in Boston. The arriving birds seem to be in good condition, and transmitters attached to them have revealed they are capable of returning to the Arctic. One flew back to the airport the following year for a round trip of more than 7,000 miles (11,265 kilometers), Smith said.

And, not surprisingly, it’s unclear what’s driving the owls' attention-grabbing appearances in recent years. "That's one of those things that is a good question," said Smith, who works for the Massachusetts Audubon Society. "Is it something that is happening in the Arctic habitat?"

Since beginning to study the birds at Logan in 1981, Smith has seen seasons with as few as one bird and as many as 43.

Male snowy owls can be almost completely white, while females have more brown flecks on their feathers and young birds have even more brown and can blend into the dead grass of a marsh, a location they are likely to turn up, said Geoff LeBaron, the Audubon Society's Christmas Bird Count director.

"It often looks like a Clorox bottle on a fence post, and when it turns its head and looks at you, there are these glowing yellow eyes, and of course, they can turn their heads most of the way around," LeBaron said.

Snowy owls are included in the Christmas Bird Count, an annual survey that begins on Dec. 14. Anyone can submit a snowy owl or other bird sighting anytime at eBird.org.