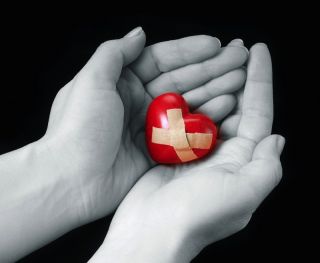 Feeling brokenhearted can have real effects on the heart.
(Image: © Broken heart photo via Shutterstock)

A rare condition known as "broken heart syndrome" is usually brought on by an emotionally devastating or stressful event. But now, a new study from Europe reveals the condition can also be brought on by happy events and positive emotions.

This is the first time researchers have linked pleasant experiences with broken heart syndrome, which causes a sudden but temporary weakness in the heart muscle, according to the findings, published on Thursday (March 3) in the European Heart Journal. However, many negative forms of emotional stress, including grief, fear, anger and anxiety, are known to trigger episodes of the condition.

Broken heart syndrome can be easily confused with a heart attack because people who experience the syndrome have symptoms such as chest pain and shortness of breath, the study said. These symptoms typically appear within minutes or hours after a person has been through a stressful experience.

The syndrome is also referred to as stress cardiomyopathy, but was originally named takotsubo syndrome (TTS) by the Japanese researcher who first described it in 1990. The researcher called it that because the heart's bulging appearance in people with the condition resembled the shape of a "takotsubo," or octopus pot. [10 Amazing Facts About Your Heart]

Previous studies on broken heart syndrome have focused exclusively on the negative stressors known to bring on the condition's symptoms. But in conducting this new study, the researchers wondered whether joyful experiences may also trigger the condition in some people.

To find out, they analyzed data collected from 1,750 people who were part of the International Takotsubo Registry, a database of men and women in the United States and eight countries in Europe who were diagnosed with the condition.

The researchers found that 485 participants in the study had definite emotional triggers preceding the onset of their symptoms. Of these, the vast majority of participants experienced a negative emotional event, such as the death of a loved one, a frightening experience like an accident or friend's illness, an argument, or a financial problem.

But in 20 people, or about 4 percent of participants, a positive emotional event — a birthday party, becoming a grandmother or great grandmother, a son's wedding, or an unexpected visit from a favorite relative —brought on their symptoms.

Although only a small percentage of participants were diagnosed with "broken heart syndrome" after a joyful or socially desirable event, the researchers were surprised to find that positive emotions can lead to TTS, Ghadri said.

The researchers dubbed the 20 individuals with a positive trigger as the "happy hearts," comparing them to the 465 people with a negative preceding event, categorized as "broken hearts."

After reviewing both groups' medical records for a variety of factors — such as cardiovascular risks, results from lab and heart imaging tests, symptoms, and hospital stays — the researchers found many similarities between the "happy hearts" and "broken hearts."

Women represented about 95 percent of those affected in both groups. And the two groups had similar symptoms, such as chest pain and shortness of breath, when they were admitted to the hospital.

The study also found that happy hearts were slightly older (71), on average, than broken hearts (65).

One of the noticeable differences between the two groups was that imaging tests revealed that happy hearts were more likely to have a certain type of the syndrome, called the midventricular type, than were broken hearts.(There are four different types of TTS.) Thirty-five percent of happy hearts had the midventricular type, compared with 16 percent of the broken hearts. [7 Weirdest Medical Conditions]

Although this was an interesting and novel observation, the underlying mechanism that may be responsible for this finding is unknown, Ghadri told Live Science.

The research team will now investigate brain activity patterns in the people with "happy heart syndrome" and compare those patterns to those found in people with "broken heart syndrome" to learn more about the interactions between the heart and the brain. For now, it's unclear exactly how a person's emotional states play a role in the development of this heart-muscle weakening condition.

One hypothesis is that a surge of stress hormones, such as adrenaline, may temporarily damage the hearts of some people, said the Mayo Clinic.

Perhaps happy and negative events, while distinct in nature, share a common emotional pathway in the central nervous system, which can ultimately trigger TTS, Ghadri speculated.

While researchers learn more, the good news is that most people with TTS often make a quick and full recovery. The heart is weakened for only a brief period of time, and it tends to have no permanent or long-term damage, according to information from the National Heart, Lung and Blood Institute.