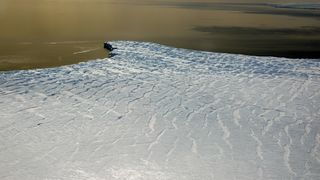 The highly crevassed front of Ferrigno Ice Stream in the Bellingshausen Sea shows where the ice shelf is likely to break off into icebergs. This picture was taken during the airborne NASA IceBridge campaign on Nov. 16, 2011.
(Image: © Matthias Braun, University of Erlangen-Nuremberg, Germany)

Over the past 20 years, ice shelves in Antarctica that normally support the rest of the continent's glaciers have been shrinking, and some have disappeared entirely. How much more ice can disintegrate before Antarctic glaciers start freely tumbling into the ocean?

A recent study led by researchers at the Friedrich-Alexander-Universität, in Germany, has mapped out which Antarctic ice shelves are buttressing the most ice and which are more "passive" and thus can stand to lose a large area without any immediate effect on the rest of the ice shelf.

Ice shelves are slabs of ice several hundred meters thick that extend from the edges of the mainland and float on the surface of the sea. They are firmly linked to glaciers and ice streams in mainland Antarctica, which slowly push the floating ice farther seaward, according to the researchers. When the seaward fronts of these ice shelves break off, they form new icebergs and the loss of ice is naturally replenished by the glacier ice from the mainland flowing in. [Photos of Melt: Glaciers Before and After]

Some of the ice shelves, however, also push back on the glaciers, providing resistance and reducing the speed at which the glaciers flow into the ocean, said lead study author Johannes Fürst, a research assistant at the Institute of Geography at the Friedrich-Alexander-Universität.

"Ice shelves restrain the outflow from upstream like a plug in a bathtub," Fürst told Live Science. "If you take the plug out, the water runs out, except this is frozen water and if you take out the ice shelves its flow will accelerate out into the ocean and eventually raise sea levels."

In 1995, Antarctica's Larsen A ice shelf collapsed, removing ice cover from an area equivalent to the size of Berlin, according to Fürst. Seven years later, the much larger Larsen B ice shelf also broke apart. While the disintegration of the two shelves did not have an immediate effect on sea levels, the ice loss resulted in upstream glaciers accelerating by up to eight times their normal flow, according to the researchers.

By analyzing the speed of ice flow from satellite images and measuring ice thickness, Fürst's team quantified the buttressing effect of ice shelves, and categorized the areas into "passive shelf ice" that did not provide any support, or shelf ice that was actively holding inland ice back. [Album: Stunning Photos of Antarctic Ice]

Ice shelves in the Amundsen and Bellingshausen seas, however, are the most susceptible to further ice loss, according to the research findings. They are made up of 7 percent and 5 percent passive ice, respectively, the researchers found.

"We expect that further ice shelf retreat there will instantly produce dynamic changes, which may well give rise to increased ice outflow from the mainland," Fürst said.

This is worrying because those are regions where the ice shelf is already thinning at the highest rate, he explained. And since the ice sitting behind them is also on bedrock sloping toward the coast, the researchers say that monitoring these shelves for any fractures outside the passive shelf band is urgently needed.

The new study was published online Feb. 8 in the journal Nature Climate Change.