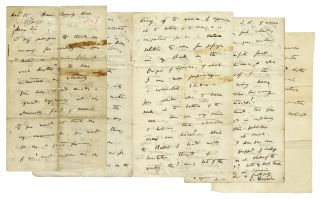 A handwritten letter by famed naturalist Charles Darwin to a British marine biologist was put up for auction yesterday (Feb. 25) but failed to sell, according to Nate D. Sanders Auctions, the Los Angeles-based auction house that arranged the sale.

The letter, which was originally listed with a minimum bid of $69,500, was expected to be one of several of Darwin's letters to be auctioned off recently, but the historic document did not end up being sold. Last September, a letter in which Darwin expressed his lack of belief in the Bible sold for a record $197,000, according to Bonhams, the British auction house that arranged the sale in New York. That was more than three times the previous record of $59,142 for a four-page letter that Darwin had penned to his niece, CBS News reported.

The letter being auctioned off by Nate D. Sanders was signed and dated Dec. 12, 1860, and was written approximately a year after Darwin published the first edition of his famous book "On the Origin of Species." The book, published in 1859, detailed his work on the theory of evolution and is considered the foundation of evolutionary biology. It introduced the idea that species evolved over generations as a result of natural selection of heritable physical or behavioral traits that increase the chances of an organism's survival.

In his letter, Darwin told biologist George Charles Wallich that he was planning to release a corrected edition of the book and that he was profoundly impacted by Wallich's research. [See Images of Charles Darwin's Life on Display]

The document thanks Wallich for sending a copy of his book "Notes on the Presence of Animal at Vast Depth in the Sea," published in 1860. Darwin also expresses excitement about Wallich's research on brittle starfish, and he questions Wallich about his findings on basaltic pebbles.

In the letter, Darwin also asks Wallich about his observations of foraminifera, a type of single-celled organism with a shell that lives in many marine environments. He wrote, "The foraminifer deposit was sometimes or often thin; and this is the point on which I am anxious for information – It bears on the decay of the exuviae [exoskeleton remains] of organisms at the bottom of the sea; and is important for me in relation to some few passages in my Book…"

"This signed letter concerning deep-ocean discoveries shows Darwin's interest in biological life and geology at the ocean bottom and his meticulous efforts at clarifying the findings of Wallich," auction house owner Nate Sanders said in a statement. "Darwin's attention to details demonstrates why he was such a superb naturalist."

More information about the letter can be found on the Nate D. Sanders website.