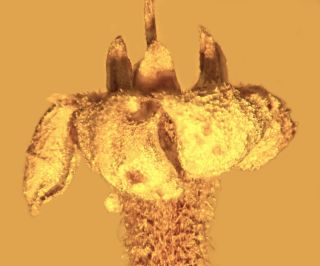 Delicate, though possibly deadly, flowers trapped in amber for some 30 million years have been discovered, scientists report.

The fossilized plants are asterids, which make up about one-third of the world's flowering plants. About 80,000 species fall under this taxonomic clade, including coffee trees, tomato plants, mint, basil and tobacco. Despite the ubiquity of asterids today, no fossilized examples of the plants have been found until now, the researchers say.

The two flower specimens, which have been named Strychnos electri, belong to the same genus as poisonous plants that have been used to make lethal, paralyzing substances like strychnine and curare. [Images: Amazing Ancient Life Trapped in Dominican Amber]

"Species of the genus Strychnos are almost all toxic in some way," George Poinar Jr., an amber expert at Oregon State University, said in a statement. "Each plant has its own alkaloids with varying effects. Some are more toxic than others, and it may be that they were successful because their poisons offered some defense against herbivores."

Scientists have identified about 200 species of Strychnosplants. One of the most famous representatives of this genus might be Strychnos nux-vomica, from which strychnine is derived. Strychnine has been used in rat poison, but it has also cropped up as a weapon in Agatha Christie novels, and Norman Bates used the poison to kill his mother in Alfred Hitchcock's "Psycho." Strychnine poisoning was even proposed as a possible cause of Alexander the Great's death.

Curare —which contains the toxin tubocurarine, extracted from the plant Strychnos toxifera — has a storied history as well. Hunters in South America used the poison to make paralyzing blow darts (witnessed as early as the 16th century by the English explorer Sir Walter Raleigh). More recently, safe doses of the poison have been used in medicine as a muscle relaxer.

It's not clear how toxic (if at all) the newly discovered Strychnos electri was. These two new flowers became entombed in sticky tree resin in a steamy tropical forest in what is today the Cordillera Septentrional mountain range in the Dominican Republic some 20 million to 30 million years ago.

Amber, which is hardened tree resin, is an important source of knowledge about tiny prehistoric life on Earth. In Dominican amber in particular, scientists have discovered species of wasps, locusts, ticks, blood-sucking flies and beetles suspended in time.

The new flower findings were reported yesterday (Feb. 15) in the journal Nature Plants.