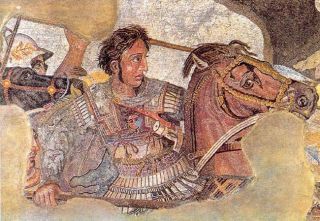 Detail from the Alexander mosaic from the House of the Faun, Pompeii, c. 80 B.C.
(Image: © National Archaeologic Museum, Naples, Italy)

On June 11, 323 B.C., the famed Alexander the Great died, felled by a mysterious illness that left him too weak to move.

Ever since, the cause of the Macedonian leader's death has been debated. Did he succumb to the cumulative effect of battle injuries received while conquering everything between Greece and India? Did a parasite or bacterium lay him low? Or was Alexander the Great poisoned?

Now, research finds that if poison killed Alexander the Great, the toxin may well have come from an unassuming plant called white hellebore (Veratrum album) that may have been slipped into his wine.

Death of a king

Alexander was the son of the king of Macedonia, Philip II, and Olympias, one of Philip II's five to seven wives. Upon inheriting the throne, Alexander began an ambitious military campaign that would extend the borders of his empire from modern-day Greece to the Himalayan Mountains. He was planning to invade the Arabian Peninsula when he died. [10 Reasons Alexander the Great Was, Well … Great]

There are no surviving records of Alexander's death written at the time, leaving historians struggling to piece together the end of the king's life from histories written, at minimum, 300 years later. Many of these histories are themselves based on questionable sources, such as propaganda penned after Alexander died. And the king's tomb and body have never been found.

With that in mind, determining the cause of Alexander's death is a thought exercise. Modern scientists have suggested culprits ranging from malaria to a bacterial infection from drinking river water to side effects from old battle wounds.

"We can never settle the question for good without a body," said Leo Schep, a toxicologist at the University of Otago National Poisons Center in New Zealand.

In a new study detailed in the January issue of the journal Toxicology History, Schep and his colleagues speculate that if Alexander was indeed poisoned, a plant may have done him in. [The 10 Most Common Poisonous Plants]

Schep got interested in the 2,000-year-old cold case about a decade ago, when a production company in the United Kingdom approached him with the question for a documentary. After that experience, he stayed interested, he told LiveScience.

He and his colleagues first considered the two divergent accounts of Alexander's death. In one, championed by ancient historian Plutarch and others, Alexander is said to have gradually become feverish after a banquet in Babylon. As he sickened, he lost his ability to walk and died after 11 to 12 days of illness. This account is based on ancient historians' citation of the "Royal Diary," a document allegedly written during Alexander's reign. However, modern historians are skeptical that the Royal Diary was really contemporaneous with Alexander; it's likely that the document was written after his death to quash rumors of poisoning in an attempt to keep the king's empire together.

The second narrative is similarly unreliable. This one comes from "The Book on the Death and Last Testament of Alexander," which probably also came about shortly after the king died. However, the original document is lost and survived only in highly fictionalized form as "The Alexander Romance."

That version describes Alexander taking a drink of wine at the banquet and crying out from a pain in his liver. Suspecting he'd had too much to drink, he asks his cup-bearer to bring him a feather he could use to induce vomiting. The cup-bearer, who'd poisoned his wine in the first place, brings him a feather smeared with yet more poison, the story goes. The king suffers for 11 days, becoming very weak, and at one point attempts to crawl to the Euphrates river in order to drown himself.

Taking the tale in "The Alexander Romance" at face value, Schep and his colleagues began to narrow down possible poisons that could have caused the symptoms.

Two common poisons, strychnine and arsenic, were quickly eliminated. Both cause death within hours or a few days, and the symptoms don't match Alexander's reported abdominal pain followed by progressive muscle weakness, the researchers wrote. [The 14 Oddest Medical Case Reports]

Schep and his colleagues considered other famous poisons, such as hemlock, which causes muscle paralysis, convulsions, coma and death. But hemlock acts quickly. Another common ancient poison, henbane, doesn't fit the clues, because symptoms include mania and visual disturbances. Alexander was conscious and lucid during his illness, albeit weak.

After ruling out several other plant poisons that would have been accessible, Schep and his colleagues suggest the most likely toxin was white hellebore, a flowering herb common in Europe. The plant affects the central nervous system, shutting down the molecular channels that nerve cells use to communicate. As a result, the nerves that tell muscles to move can't talk effectively, causing muscle and heart weakness.

Upon ingesting white hellebore, the victim is immediately wracked with abdominal pain so severe it's often mistaken for a heart attack, Schep and his colleagues wrote. Compounds extracted from the plant can be fermented along with alcohol, which means they could have easily been slipped into Alexander's wine. After the pain, the muscular effects begin, slowing the heart muscle and leaving the limbs weak. Victims remain conscious but immobile until right before death.

Alexander was a strong leader, but his era was dangerous for royalty. His own mother, Olympias, may have had his father assassinated; she forced another of her husband's wives to commit suicide and may have poisoned his half-brother, too. Those who research the dynasty have to come to terms with mysterious deaths and unidentified corpses: One lavish tomb excavated in Greece in 1977 is the subject of a 33-year-long debate over whether it contains the body of Alexander's father or his poisoned half-uncle.

Even finding Alexander the Great's body would probably not settle the question, Schep said. "An autopsy would yield some information," he said, "but if it was death by poison, that may be a bit difficult to prove, unless of course he was poisoned by a heavy metal." It's not clear how long other types of poison would survive in bone for thousands of years, he said.