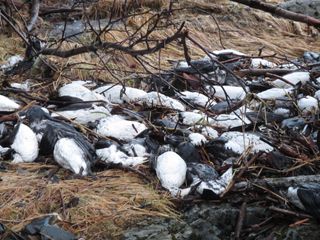 Thousands of dead seabirds have washed up on Alaskan shores over the past nine months. And while a dead bird washing ashore is a fairly common occurrence, these large numbers are leaving scientists concerned and confused.

Nearly 8,000 common murres (Uria aalge) were found along the shores of Whittier, Alaska, in early January. Over the New Year's holiday, Alaska experienced four days of gale-force winds from the southeast that resulted in dead birds washing ashore, said Robb Kaler, a wildlife biologist for the Alaska branch of the U.S. Fish and Wildlife Service (USFWS). Scientists have known for some time that the key to surviving strong storm winds is having an energy reserve, according to an expert at Tufts University, and Kaler and his colleagues think that the common murres were not finding enough food this season, which may be why so many didn't make it through the storm.

In cases like these, experts typically measure the number of dead birds per kilometer, said Julia Parrish, a professor in the School of Aquatic and Fishery Sciences at the University of Washington in Seattle and executive director of the Coastal Observation and Seabird Survey Team (COASST), which is one of the organizations studying areas where these birds are washing ashore, alongside the USFWS and the U.S. Geological Survey National Wildlife Health Center (NWHC). For the Whittier survey, the final measurements came to approximately 4,600 birds per kilometer, Parrish told Live Science. [5 Mysterious Animal Die-Offs]

The common murre is "one of the most abundant and widespread seabirds in Alaska," Kaler told Live Science in an email. While other dead seabirds are being reported on Pacific shorelines, current reports indicate that about 99 percent of the animals are common murres, Kaler said.

Seeing a dead seabird on the beach is not altogether unusual, especially during September and October, when the birds are leaving their breeding colonies, Parrish said. However, dead common murres started showing up in Alaska in March.

"This is really weird, because that is the beginning of the breeding season," Parrish said. "That's when [seabirds] are [usually] fat and sassy."

So far, the NWHC has examined 100 bird carcasses, and most of the birds seem to have died due to starvation, Kaler told Live Science.

"While we know murres are starving," Kaler said, "we do not understand the mechanism."

There is a chance that saxitoxin, a toxin related to paralytic shellfish poisoning, or domoic acid, a toxin that causes amnesic shellfish poisoning, could be responsible for some of these deaths, he said. But both of these toxins are difficult to detect in birds that have nothing in their stomachs or gastrointestinal tracts, which was the case with most of these animals, Kaler said.

In the past, seabird die-off events — in which thousands of birds die in a short period of time — have been associated with strong El Niño events, Kaler said. In 1993, there was another die-off of common murres recorded in the northern Gulf of Alaska, where scientists found about 3,500 dead or dying common murres along the shoreline over a period of six months. Scientists calculated that over that period, about 10,900 bird carcasses actually made it to shore, according to a 1997 study published in the journal Marine Pollution Bulletin.

Because researchers were able to monitor only a small fraction of the beaches in Alaska, that study's scientists projected that the actual final death count in 1993 was at least 120,000 birds.

With this most recent event, "[w]e assume the die-off is connected to one of the largest oceanographic-atmospheric events, known as 'The Blob,'" Kaler said. This event is the presence of a large area of water that falls well above the average temperature usually observed in the North Pacific, he said. "We do not know how [that] this relates to El Niño or climate warming, but we believe they are factors," Kaler said.

The USFWS also noted in a recent bulletin that common murres have turned up at locations as far inland as Fairbanks, Alaska, where the birds have been seen swimming in rivers and lakes. Wildlife biologists consider this to be unusual behavior, since common murres are seabirds and so don't usually show up so far inland, Parrish told Live Science.

Additionally, while the die-off has been most visible in Alaska, similar events affected seabird populations in Washington, Oregon and California during the months of September and October, Parrish said.

What does this mean?

The behaviors of seabirds are often indicators of what is happening in the marine system, said the U.S. Fish and Wildlife Service. Current estimates of the common murre death toll in the recent die-off have suggested that more than 100,000 birds have probably died over the past nine months, and dead birds are likely to continue showing up through the spring, Kaler said.

It is important to note that this high death count doesn't mean that common murres are in danger as a species. There are an estimated 2.8 million common murres in Alaska, Parrish said. This means that current estimates of the die-off account for only approximately 3 percent of the total common murre population in the state.

That's not to say that the appearance of large numbers of dead birds on beaches isn't of concern, Parrish said. Scientists are speculating that this event indicates a species struggling to deal with altered circumstances, he said.