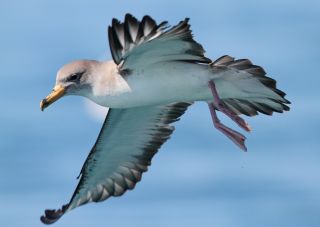 Coastal seabirds can fly over large swaths of ocean for days on end, not stopping until they reach their favorite feeding spot. Scientists have long wondered how these birds manage to find their way home.

Turns out, for seabirds, the nose knows.

By assessing bird flight patterns, a team of scientists has found evidence supporting the idea that seabirds navigate using smell. [In Photos: Flight of the Brown Pelicans]

This is the "first direct evidence that seabirds use odor maps to navigate over vast expanses of visually featureless oceans to locate preferred grounds, and then to return home and pinpoint their breeding colony," said Andrew Reynolds, lead author of the new study detailing the findings.

Reynolds is a research scientist in the Department of Computational and Systems Biology at Rothamsted Research, an agricultural research center in the United Kingdom. Rothamsted scientists are interested in investigating olfactory navigation because many insect pests also use odors to locate and infest crops, he said.

But for now, Reynolds is focusing on seabirds.

For this study, the researchers used a variation of a Lévy flight pattern, a cluster of movements with long steps between them, "rather like someone who has lost their keys," Reynolds said.

Researchers have studied seabird olfaction for decades, and they've found intriguing results. For instance, only a minority of seabirds called Cory's shearwaters could find their way home after researchers impaired the birds' sense of smell, whereas the majority of birds with magnets on their heads (attached to override any magnetic cues they might use) and regular birds were able to find their colony, according to a 2013 study.

But these past studies only showed that seabirds use smell to find their way home. More evidence was needed to suggest that seabirds routinely use smell in daily navigation, such as when they're searching for feeding sites. (The researchers noted that it's known that seabirds use both their smell and vision to find and capture prey.)

In all, 69 percent of the birds showed flight patterns that matched the modified equation. The birds' movements suggested they were using a cue — likely smell — to navigate, the researchers said. [The 10 Most Amazing Animal Journeys]

However, the true statistic for flight patterns that matched the model is 36 percent, said Andrew Edwards, an ecological modeler with Fisheries and Oceans Canada who was not a part of the study. "For 69 percent of the birds, the proposed model is indeed the best model out of those tested," Edwards told Live Science in an email. For many of those birds, however, there wasn't a "good" fit with the model; rather, it's just that the fit was better than it was for the other two models. Just 36 percent, or 75 of the birds, had flight patterns that were an actual "good" match with the model, Edwards said.

Does the nose know?

However, smells aren't always detectible because of atmospheric turbulence, so birds will reorient and change direction until they find another recognizable smell, the researchers found.

"In this way, the bird is led to the neighborhood of the colony," they wrote in the study. "When pelagic birds [those that spend most of their lives at sea, far from the shore] get close enough to their target, they may rely on other sources of information (landmarks, flights of other birds and 'colony odors')."

The "fascinating" study provides "direct evidence that [these seabirds] have an olfactory map, which is what people have been saying for a long time," said Lucia Jacobs, a professor of psychology at the University of California, Berkeley, who studies olfaction, and wasn't involved with the study.

Smell is likely the guiding factor for these birds because "there's no evidence that any birds are migrating primarily by sound," Jacobs said. "This is over such long distances — over open water, there really isn't anything else for them to use."

Some of the birds in the study flew over visual cues, such as fishing boats, but they showed the same flying patterns as birds without visual cues, which further supports the idea that smell helps these birds navigate, she said.

The study was published online today (July 1) in the journal Proceedings of the Royal Society B.