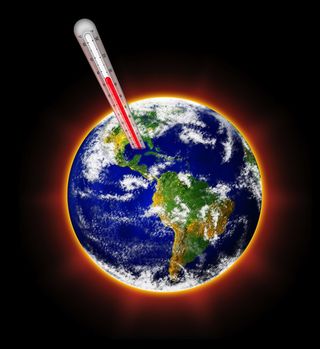 Jeremy Deaton writes about the science, policy, and politics of climate and energy for Nexus Media. You can follow him at @deaton_jeremy. Deaton contributed this article to Live Science's Expert Voices: Op-Ed & Insights.

If you watched this year's State of the Union address, you might remember President Barack Obama's frustrated nod to congressional climate change doubters.

"Sixty years ago, when the Russians beat us into space, we did not deny Sputnik was up there," Obama said. "We did not argue about the science or shrink our research and development budget. We built a space program almost overnight, and 12 years later we were walking on the moon."

Despite decades of research, too many U.S. politicians still deny climate change , a phenomenon so thoroughly documented as to find agreement among virtually every leading body of American scientists — NASA, NOAA, the National Academy of Sciences, the American Association for the Advancement of Science, the American Geophysical Union and the American Meteorological Society, just to name a few. And yet, climate contrarians continue to reject the science and muddy the waters of public understanding.

Here, in an effort to set the record straight, are five facts about climate change everyone needs to know.

You may have heard that, according to satellite data, there has been no significant warming for the last 18 years. This is grossly misleading. Eighteen years ago, El Niño drove up global temperatures , making 1998 an exceptionally hot year.

Contrarians use 1998 as a baseline because subsequent warming appears modest by comparison. However, the mercury has continued its inexorable rise. Since the 1880s, average temperatures have risen 1.8 degrees Fahrenheit, on average. 2015 was the hottest year on record, according to NOAA, and 2016 will likely be even hotter.

2) The climate is changing faster than at any point in the history of human civilization.

Climate change doubters are fond of saying that climate is always changing. That is correct, and in fact, that's the problem. Atmospheric physicist Michael MacCracken, chief scientist for climate change programs at the Climate Institute, explained in an interview, "If climate had been steady in the past when there had been all kinds of things acting — volcanoes or solar or changes in the orbit or something — then you would think climate is pretty robust and can't change, but what we've discovered is relatively small changes in the past have changed the climate a great deal."

Today, we are unloading more than 30 gigatons of carbon dioxide into the atmosphere each year, according to the International Energy Agency. All that carbon pollution is cranking up the global thermostat to sweltering levels. According to the journal Science, temperatures are rising faster than they have in the last 10,000 years, since the beginning of human civilization.

Some have suggested that current global warming is the result of natural variations in the Earth's climate. Unfortunately, humans are very much the cause of climate change. Carbon pollution from cars, trucks, planes, power plants, factories and farms are the central driver of global warming. Carbon dioxide and other greenhouse gases are trapping heat , causing global temperatures to rise, altering the climate. According to a 2014 report from the American Association for the Advancement of Science, the world's largest general scientific society, we now know that humans are causing climate change with at least the same certainty that we know smoking tobacco causes lung cancer.

Contrarians like to say that scientists disagree about global warming. And yet, a peer-reviewed study published in a leading academic journal has found that roughly 97 percent of climate scientists agree that humans are causing climate change. James Powell, director of the National Physical Sciences Consortium, argues on his website that the consensus is actually closer to 99.9 percent of climate scientists.

There is no serious debate about who or what is responsible for global warming. America's satirical flagship, The Onion, might have put it best: "New Climate Change Study Just 400 Pages Of Scientists Telling Americans To Read Previous Climate Change Studies."

The latest talking point from climate change doubters is that a little global warming just isn't a big deal. Sure, a few degrees of warming may not sound like a lot, but small changes in the average temperature of the Earth can have dramatic consequences. Hotter weather means the atmosphere can hold more moisture, leading to both more drought and more severe storms. Warmer temperatures also threaten to melt the polar ice caps, raising sea levels. And that's not to mention ocean acidification, whereby the world's oceans absorb excess atmospheric carbon dioxide and turn more acidic.

In every way, climate change is rendering our home a dangerous place. If left unchecked, drought, storms and rising seas will mean less freshwater and less arable land. This could lead to widespread shortages of food and water, mass migrations and armed conflict. As novelist Margaret Atwood wrote on Medium, "It's not climate change. It's everything change."

The persistent and pernicious myths about climate change — that it's not real, that it's not our fault, that it's not a threat — distract from the real conversation that needs to happen about policy: How should the United States move to clean power? How should cities prepare for more severe storms and coastal flooding? How should families use less energy?

The science is settled. The solutions are there. It's time to get to work.