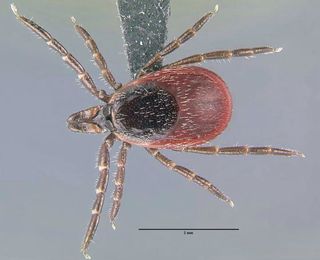 Here a tick, there a tick, everywhere a tick, tick: The critters that can carry Lyme disease are now more widespread in the U.S. than ever before, according to new research.

In the study, experts mapped the distribution of Lyme-disease-carrying ticks and found that these ticks are ranging farther north than before, and are now living in nearly 50 percent of U.S. counties.

There are two tick species that can carry the Borrelia burgdorferi bacteria that cause Lyme disease: the blacklegged tick, also known as the deer tick (Ixodes scapularis), and the western blacklegged tick (Ixodes pacificus). The bacteria can only be transmitted to people through the ticks' bites. I. scapularis is the primary carrier in the eastern U.S., and I. pacificus is the primary carrier in the far western states.

Researchers previously surveyed these ticks' distribution in 1998 and mapped the tick populations in the continental U.S. Those results showed that the ticks were present in 34 percent of U.S. counties, across 41 states.

In the new study, they looked at studies and data from state health departments, and reached out to public health officials, Lyme-disease researchers and other scientists. [Video: A Tick Bite Visualized]

For every U.S. county, the researchers evaluated whether tick populations for I. scapularis and I. pacificus were "established" or "reported." "Established" meant that there was evidence that a population of ticks was alive and well, and reproducing in the county, whereas "reported" meant that a few ticks had been spotted at some point, although not necessarily recently, the scientists said.

"What we saw was a pretty substantial expansion in the northeastern U.S. in the north central states," Rebecca J. Eisen, lead author of the study and a research biologist at the Centers for Disease Control and Prevention, told Live Science. The ticks are also expanding farther west and east, she said.

And Lyme cases have been on the rise as well. In 1991, about 10,000 Lyme disease cases were reported in the U.S., but in 2014, more than 33,000 Lyme cases were tallied, according to the CDC. However, some of this increase may be due to more awareness of the disease and more cases being reported. Early-stage Lyme symptoms include fever, chills, joint pain and a distinctive "bull's-eye" rash at the site of the tick bite. If untreated, the disease can cause arthritis, heart palpitations, brain inflammation, and weakness of the facial muscles, the CDC says.

One reason for the ticks' recent range expansion may be climate change, said Ralph M. Garruto, a professor of biomedical anthropology at Binghamton University, State University of New York.

"Ticks would be able to move farther north with warmer temperatures, as severe cold and dry conditions affect tick survival," said Garruto, who was not involved in the study.

Eisen agreed, adding that climate plays a significant role in defining the western limit of the range of the blacklegged tick. "For example, it's too dry in Colorado for this tick to survive," Eisen told Live Science.

Garruto also said that human activity could be creating more hospitable environments for ticks. "There may be a lot more forest fragmentation in the Northeast due, in part, to built environments — an aspect of research we are currently looking at," he said. "Perhaps the increasing deer populations in many areas are responsible for moving [the ticks] around," as well as giving the ticks more opportunity to breed, he added.

And established tick populations can readily travel between neighboring counties, Eisen said. "A county is more likely to be colonized if its neighbor has ticks, so having ticks nearby and having woods with deer is a good indication that the tick is likely to come to a new area," she said. [The 10 Most Diabolical and Disgusting Parasites]

She noted that many ticks do not carry the bacteria that cause Lyme disease.

The new study offers "a nice summary of the distribution of tick species that have the potential to carry Lyme, but their distribution alone does not equate with Lyme disease," Garruto told Live Science. Researchers would need to know the percentage of ticks that are infected in order to speculate on whether the expansion of the ticks' range could lead to an increase in Lyme disease cases, he said.

"We really want people to be aware that risks change, and it's important to know what ticks and tick-borne disease are common in the places where you live and where you visit," Eisen said.

The findings were published online Jan. 18 in the Journal of Medical Entomology.