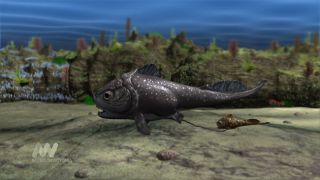 The armored fish Materpiscis attenboroughi, which appeared during the Devonian Period, may have given birth to its young tail-first, similar to some sharks and rays.
(Image: © Museum Victoria.)

Remains of embryos entombed in their fish mothers' wombs for 380 million years have been found in fossils from an ancient rock outcrop in Western Australia. The finding is a big deal because it suggests that sex goes way back. The prehistoric fish, called placoderms, are found at the base of the vertebrate evolutionary tree (in a large group we humans also belong to), so it now looks like sexual intercourse, and the mating behaviors that go along with it, were more widespread in these ancient animals than previously thought, said the scientists who made the discovery. The embryos were found in the body cavities of Incisoscutum ritchiei, an extinct jawed fish that lived from about 430 million years ago to 360 million years ago. Placoderms' heads and parts of their bodies were covered with bony armor. They were also some of the first jawed animals. The specimens were found in the Gogo Formation of Western Australia by John Long of the Museum Victoria in Melbourne, Australia. At first, he thought that animal remains found in the placoderm fossils were the animals' last meals, but after finding embryos in another group of placoderms, Long and his colleagues took a closer look and found that the new specimens were also the remains of unborn embryos. "We could see that the new specimens had the same bone structure as the previous embryos, were the same species as the adult, they did not have any broken or stomach-etched features (from digestive acids or from being chomped) and that they were at the same stage of growth as the previous embryos," Long wrote in an email. "All of these facts proved they were embryos, not prey items." The scientists' work was funded by the Australian Research Council. Sex evolution Because the embryos were found inside their mothers, these placoderms must have copulated to produce offspring — instead of laying eggs and fertilizing them outside the mothers, as some species of fish and others animals do. And since these placoderms sit near the beginnings of the vertebrate tree of life, "it means that complex forms of mating evolved probably about the same time as jaws evolved," Long told LiveScience. To engage in sex, the fish would have needed the proper, er, equipment. The structure of the mating parts of Incisoscutum are related to the pelvic girdle and hind limb, or leg, as in humans. "These fish were using the hind limbs for the very first kind of vertebrate copulations," Long said. "We humans have an expression that 'we like to get a leg over,' but placoderms liked to get a leg in." Exactly where the placoderms fit in on the evolutionary tree is still a key question; fitting them into their proper place will help scientists better understand the evolution of the traits of internal fertilization of embryos and live birth. The findings of this study, detailed in the Feb. 26 issue of the journal Nature, "may prove to have far-reaching implications for our understanding of early vertebrate evolution," said Per Ahlberg of Uppsala University in Sweden in an accompanying editorial in the journal. Ahlberg was not involved in the study. Long and other scientists are continuing to turn up and examine placoderm fossils from sites in Australia and are learning more about the ancient creatures and their anatomy and other traits with improved technologies. "We are learning more about placoderms with each new discovery," Long said.