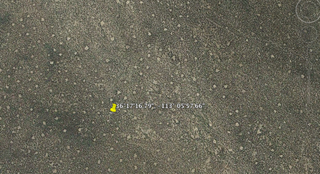 This weird polka-dot pattern in the vegetation near a volcano on the rim of the Grand Canyon could be the work of red harvester ants.
(Image: © Google Earth)

Not far from the Grand Canyon, near a landmark called Vulcan's Throne, the ground is dotted with strange, barren circles, visible from orbit.

Evidence of an alien encounter? Nope. The likely culprit is actually ants — a lot of them. So many that the scientists who discovered them are referring to the area as "the Las Vegas of ants."

Physicist Amelia Carolina Sparavigna, a specialist in image processing and satellite imagery analysis at the Polytechnic University of Turin in Italy, noticed the bizarre polka- dot features while studying the dimensions of the Grand Canyon rim in Google Earth. In a valley near the cinder cone volcano Vulcan's Throne, on the canyon's North Rim, Sparavigna saw dirt circles, irregularly spaced in the scrubby desert vegetation. [Images of the Ant Circles and Other Strange Sights on Google Earth]

"I knew that patterned vegetation can be created by competition between plants and animals, and that, in Namibia, there is a patterned vegetation created by colonies of insects," Sparavigna told Live Science, referring to Namibia's famous "fairy circles." Those odd barren circles in Namibia might be the work of sand termites, though scientists disagree on the true culprit. Other theories include hydrocarbon seeps, ants, and below-ground competition between grasses for water.

Sparavigna suspects that the Arizona circles have a simpler explanation. The desert around the Grand Canyon is home to red harvester ants (Pogonomyrmex barbatus), which can build nesting mounds 47 inches (120 centimeters) in diameter. These mounds are often surrounded by up to 108 square feet (10 square meters) of bare ground, Sparavigna wrote in a paper posted online on Jan. 11.

The paper has not been peer-reviewed, and Sparavigna is quick to note that it will take more than an eye in the sky to confirm that the bare dots are ant mounds.

"It is quite probably that the observed patterned vegetation can have its origin from the interaction of vegetation and ants, but an on-site investigation is necessary to be sure of it," she said.

The dots weren't visible in 2008 satellite images, Sparavigna wrote in her paper, but Google Earth has since sharpened its focus on Earth's surface with higher-resolution images Such imagery can provide ecologists with a notion of how organisms are interacting over time, Sparavigna told Live Science.

Ants aren't the only surprising animal life visible on Google Earth. A high-resolution patch of imagery at 10.903497 N,19.93229 E (in Chad) shows a herd of elephants grazing on a grassland. Prehistoric "geoglyphs," or huge patterns made of rock, are also visible on Google Earth imagery, including huge spoked wheels in Jordan and rings and crosses in Kazakhstan.

Sometimes, though, Google Earth imagery can trick the eye. A data artifact in Google Ocean explorer sparked rumors of Atlantis in 2009 because some users mistook the grid pattern for sunken city streets. (The artifact has since been removed.) And a Manhattan-size "island" in the South Pacific turned out not to exist (it was a digital carryover error from a mistaken sighting of an island on conventional maps).