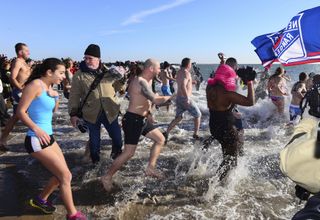 Just after midnight on Jan. 1, people around the world will ring in the New Year to the sound of noisemakers and popping corks. But on New Year's Day on Brooklyn, New York's Coney Island beach, the sound of chattering teeth will fill the air, as thousands of people gather in preparation for a ceremonial wintry dip in the Atlantic Ocean.

The event is organized by the Coney Island Polar Bear Club, a group of dedicated open-water swimmers who brave the numbing ocean every Sunday from November through April. Their New Year's Day plunge is the club's biggest event and a long-standing New York tradition. It has steadily grown in popularity since the club was founded, in 1903.

An estimated 2,000 swimmers participated in 2014, with around 6,000 to 7,000 spectators looking on, said Dennis Thomas, the club's president and a member for three decades. [Video: Dealing with Cold and Hot Weather in Sports Conditioning]

You don't have to be a member of the club to participate in the New Year's Day dip. Newcomers are welcome, as long they sign a waiver, although the club does recommend on its website that people consult with a physician before attempting winter swimming.

Thomas described preparation requirements for the dip as "rigorous" — participants must be able to put on a bathing suit. And perhaps dive shoes or gloves, for additional extremities protection. The goal is not for people to suffer, but to stay in the freezing water for as long as they're having fun, said Thomas, who is informally known among club members as "Mr. Freeze."

This year, the event will benefit from an unseasonably warm winter, with satellite data from the National Oceanic and Atmospheric Administrationplacing the average water surface temperature around Coney Island in December at about 48 degrees Fahrenheit (8.9 degrees Celsius). This is significantly warmer than past years, Thomas told Live Science, when water temperatures usually hovered around 35 degrees F (1.6 degrees C).

However, 45 degrees F is still well below what most people would consider comfortable. For swimming lessons, the Red Cross Swimming and Water Safety Manual recommends a water temperature between 83 and 86 degrees F (28 and 30 degrees C).

Thomas estimated that the average time spent in the water for most of the New Year's Day attendees is 2 or 3 minutes, although Polar Bear Club members who are more used to the cold stay in for about 10 minutes, "regardless of the temperature," he said.

The key to a successful plunge is moving around a lot, said New Yorker Ben Wolf, who has taken part in a dozen of the New Year's Day plunges. He estimated he spends an average of 7 to 10 minutes in the water, and said that every year he has to steel himself for the first shock of the cold, which causes intense tingling in his legs, "like thousands of pins," he described.

But even the most fiercely devoted Polar Bear Club members are only human, and woefully limited compared to other animals that have adaptations for swimming in cold ocean waters. Howard Rosenbaum, director of the Wildlife Conservation Society's Ocean Giants Program, told Live Science that, for many marine mammal species, a thick layer of fat called blubber is "first and foremost" in their list of defenses against the cold. Blubber operates both as insulation and as an energy source.

Some animals, such as seals and sea otters, have coats with two layers of dense fur — a thick undercoat and a covering layer of longer guard hairs. These insulate the animals by trapping layers of air near the skin, helping the sea creatures conserve heat, Rosenbaum said. The southern sea otter, which lacks blubber, has particularly dense fur, with approximately 1 million hairs per square inch (6.5 square centimeters), more than any other known animal.

Heat exchange within the body and metabolic adjustments also help marine animals regulate their temperatures, G. Carleton Ray, a biologist and research professor at the University of Virginia, told Live Science. These processes work together, along with insulating factors like blubber or fur, to help animals keep warm or cool down, he said. [Image Gallery: Weddell Seals Survive Massive Icebergs]

Ray, who was one of the first scientists to use scuba diving to study marine animals in polar environments, has not only observed the biological adaptations that mammals employ in cold ocean waters, but has also experienced prolonged immersion in those waters firsthand.

While conducting his research, he wore wet suits made of neoprene, about one-quarter-inch (0.64 cm) thick, Ray told Live Science. While studying Weddell seals near Antarctica, he and his colleagues could spend up to an hour in the water under several feet of surface ice before they had to exit to warm up. During one dive ascent, Ray recalled, parts of his regulator froze, leaving him to compete with a curious seal for access to a shared breathing hole in the ice, while his colleagues ran to get their cameras.

And swimming in such cold water came at a high energy cost, Ray added, estimating that he and the other divers burned about 5,000 calories per day.

Conditions at Coney Island on New Year's Day should be somewhat less extreme, though still intense and invigorating — and that's exactly what draws people to the Polar Bear Club plunge, Thomas said.

"In New York City, it's a bit of a stressful town, right?" Thomas said. "Parking, rent, subways, jobs and all the pressure we have. And once you go into the water, you cannot think of those things at all. I guarantee it. In that sense, it's really refreshing."

The Coney Island event is free, but the club suggests that participants make a donation to Camp Sunshine, a year-round retreat for children with life-threatening illnesses, which the Polar Bear Club has supported since 2007.