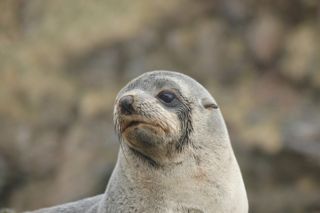 The newborn Antarctic fur seal is especially vulnerable in its first few months of life, new research suggests. It has high energy requirements, which may be harder to meet as climate changes mean they need to use more energy to keep warm.

By studying the energy requirements of Antarctic fur seals, researchers discovered that, despite climate models showing an increase in temperature, the windier and wetter conditions predicted for Antarctica may lead to lower survival rates for the seal pups. Essentially, the pups may have to allocate more energy to staying warm and less to growth and, ultimately, their survival.

"If climate change models are correct and the Antarctic Peninsula gets windier and wetter weather, this may influence how much energy is available for growth," study researcher Birgitte McDonald, a postdoctoral researcher at the Scripps Institution of Oceanography in San Diego, said in a statement. "Changes in prey availability and climate may lead pups to conserve energy … resulting in negative impacts on the ability to transition successfully to nutritional independence."

McDonald, while a graduate student at the University of California at Santa Cruz, and her co-authors monitored 48 young fur seals on Livingston Island off the Antarctic Peninsula. They analyzed how much energy the pups consumed from their mother's milk and how they used that energy — called an "energy budget" — over three periods during the first four months of life. [Image Gallery: Seals of the World]

"Energy budgets are important if we are to understand how individuals interact with their environment," McDonald said. "In juvenile animals we need to know how they allocate energy towards growth, energy storage, maintenance, including thermoregulation [keeping body temperature steady], and development of foraging skills to facilitate a successful transition to independence."

During their youth, the seal pups need to concentrate on growing and learning, to prepare for their future  away from mom. Results supported this, showing newborns use around 60 percent of the energy from their mothers for growth. But as the pups get older and their mothers begin leaving them behind periodically, that percentage begins to fall. At 1 month old, pups use only 25 percent of their energy for growth, the researchers found.

The amount of milk the pups drink was the biggest predictor of their growth rates, the researchers found, followed by various other factors, including body size, general health and the weather. Changes and fluctuations in weather due to climate change could affect how much energy the pups have to invest.

Predictions from climate models indicate that while the temperature on the island will increase, animals living in the area will also experience increased rainfall, higher wind speeds and more winter snowfall. These conditions would make it tougher for pups to keep warm, since wind and water sap heat.

Young pups are especially susceptible to heat loss because they are smaller and lack the insulation of full-grown seals. The researchers saw that when the wind chill was higher, young pups needed more energy to keep their metabolism and body temperature up. This is less important after the pups grow an adult coat.

All of these factors could lead to lower future pup survival rates, the researchers write in the April 2012 issue of the journal Physiological and Biochemical Zoology.