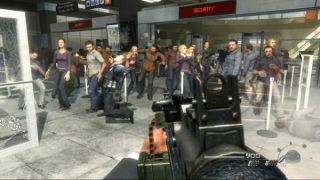 A screen grab from the 'No Russian' level of 'Call of Duty: Modern Warfare 2.'
(Image: © Activision)

Jeremy Deaton writes about the science, policy, and politics of climate and energy for Nexus Media. You can follow him at @deaton_jeremy. Deaton contributed this article to Live Science's Expert Voices: Op-Ed & Insights.

2015 will be remembered as a watershed moment in the fight against global warming. This year delivered a papal encyclical, the first-ever limits on carbon pollution from U.S. power plants , and a landmark international agreement on climate change, which President Obama described as a "turning point for the world."

It's against this backdrop that Barnard College Arctic scientist Stephanie Pfirman introduced a new toy she developed to explain the impact of climate change. Pfirman and her collaborator, Columbia University professor Joey Lee, set out to design a game that would be as entertaining as it was educational. They refused, Pfirman said, to make "chocolate-covered broccoli." Instead, EcoChains: Arctic Crisis is strategic, as primed to stoke family feuds, they hope, as Monopoly or Risk.

Can games lock in knowledge?

"We did a controlled study [presented at the 2015 American Geophysical Union conference] where people were randomly assigned to either play the game or to read an article," Pfirman said. "What we found in a four-week follow-up study is that people who played the game retained new knowledge better.”

In the game, players build a marine food chain — from ice algae and phytoplankton to ringed seals and polar bears. The ecosystem is buttressed by sea ice, which vanishes if players turn over a "carbon pollution" card. However, sea ice can be resurrected by playing a "renewable-energy" or "energy-efficiency" card.

The 41-person study found that "the game was as effective as, and in some respects more effective than, [an] article at teaching participants about climate change and the Arctic region and ecosystems." Game players took away a view of the larger food web, while readers merely remembered apex predators like polar bears and humans. Players also reported having more fun and feeling happier than the article readers.

"It's really hard to teach systems thinking," Pfirman said, referring to the process of understanding how the various parts of a system work together. "But because [players] are actually taking the actions and they're building the food web themselves, they take away an understanding of the Arctic systems."

Systems thinking is critical to understanding complex issues like climate change. Humans are better at understanding threats when the link between cause and effect is clear and direct. [6 Unexpected Effects of Climate Change]

University of California linguist George Lakoff, who has written extensively about the way humans use metaphor to understand the world,writes in "The Political Mind," "Causation is based on the primary metaphor that Causes are Forces. The direct use of force is easily understood. Indirect, diffuse force is harder to understand." That is, systemic causation, the diffuse use of force, is more difficult to grasp than direct causation, the direct use of forces.

The brilliance of EcoChains is that it depicts systemic causation as direct causation. Pull a carbon pollution card, and your ice melts. The carbon pollution card doesn't result in a marginal increase in the probability of melted ice. It causes ice to melt, eliminating key species and unraveling food webs. Players have the immediate, tactile experience of turning over an ice card and watching their carefully assembled ecosystems break apart.

Games like EcoChains, wrote co-developer Lee in the journal "Nature Climate Change," may "allow players to develop a better understanding of complex systems composed of interconnected parts, broadly known as systems thinking. Systems thinking has been argued to be a key skill necessary to address complex issues such as climate change." Lee noted that games "will be better able to overcome many of the challenges that we face in fully addressing climate change."

Climate games make the problem of carbon pollution and solutions to global warming tangible and immediate. With EcoChains, explained Pfirman, "I think [players] get a sense of agency, and they get a sense that there are problems that are happening, but there are things that we can do about them, as well."