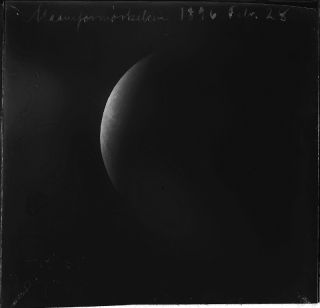 An astronomer recently made an unexpected discovery — not in the skies, but in a tea-kitchen at the Niels Bohr Institute in Copenhagen. Tucked away in the basement room of the Danish capital were cartons holding hundreds of glass plates imprinted with images of telescope observations, some of which are 120 years old.

The images present a striking record of historic solar and lunar eclipses, comets, and even views of binary stars and distant constellations.

Many of the fragile plates are yet to be unwrapped, but the majority of the images seen to date were captured by the University of Copenhagen Observatory on Østervold telescope, which was installed in 1895. A number of the photo plates date to the telescope's first years of operation. [See Photos: 'Lost' Astronomy Plates Show Historic Eclipse and More]

Astronomer Holger Pedersen, who discovered the plates, is currently retired. He keeps an office at the institute in one of their "professor-villas" in the Rockefeller Complex, where he studies and writes about some of the largest meteorites to have struck Earth. He told Live Science in an email that he was "waiting for my tea water to boil," when he decided to take a look inside a mysterious stack of cardboard boxes, which had been moved into the room several months before.

Most of them held what you'd expect for boxes relegated to basement storage — "pure junk," Pedersen said. "But two were half-full of this collection of about 300 photographic plates." He asked around the institute, and was able to trace the boxes to another basement room, where they had been moved from the observatory when it closed in 1996. The unclaimed boxes were shifted to the kitchen when their basement space was cleared to make room for electronics storage. Fortunately, Pedersen got to them before the janitors did, he told Live Science.

Some highlights of the photo plate images captured by the Østervold telescope include a series showing a lunar eclipsein 1896; a view from 1921 of Deneb, a bright star in the Cygnus constellation; and a photo of the comet Arend-Roland (which Pedersen remembered seeing as a child) in 1957.

Glass plates were first used by mid-19th century photographers, who exposed their images on thin plates coated with light-sensitive emulsion. Even after flexible film replaced glass in most photographers' cameras, astronomers continued to use glass to image sky observations, because the plates' rigidity meant that they would expose more evenly than film, the Australia Telescope National Facility explains on their website. [Photos: Contest Showcases Night Sky Sparkle]

In fact, observatories continued to generate images on glass plates until about 20 to 25 years ago, according to Michael Shara, a curator in the Department of Astrophysics at the American Museum of Natural History in New York City.

No one can say for sure how many of these glass plates have been created since the 1850s, but the Harvard College Observatory — the largest astronomical plate archive in the world — alone houses about 525,000, and there are more than 100,000 plates in observatories in Germany and Crimea, Shara said.

These archival records of skies from the past are immensely valuable to astrophysicists today, Shara told Live Science in an email. In some cases, they provide the only record we have of the skies from those times, he added. For his own research on supernovas, Shara has examined hundreds of plates to find stars whose explosions were visible more than a century ago.

One of the plates Pedersen found is of particular historical interest. It shows a solar eclipse from 1919, the same eclipse that was used by astronomer Arthur Eddington to prove Albert Einstein's general theory of relativity. Einstein had proposed in 1915 that gravity would cause light to bend around massive objects in space, such as stars or galaxies. But it was Eddington's image of the 1919 eclipse that provided the first evidence that Einstein's theory was correct.

Pedersen told Live Science that Eddington made an estimated 10 copies of his eclipse observation plate and sent them to colleagues, "to verify that Eddington had not 'cooked the results' himself," he said, adding that one of those copies must have been intended for a recipient in Copenhagen. Though there was no record in the box, Pedersen guessed that the plates were "most likely" intended for Ellis Strömgren, director of the Østerveld Observatory from 1907 to 1940.

In fact, when Pedersen spoke to contacts in Cambridge, where Eddington's original plate is kept, they didn't know that one of the copies had been sent to Copenhagen, "and they were delighted to hear it," Pedersen said.

Digging up the protocols related to these early observations, now archived elsewhere, will take time, Pedersen said. But identifying, cataloguing and digitizing the plates to make them widely available will be a valuable contribution to the global repositories of historic astronomy images.

"It may be marginal what we can expect of modern science from the old plates," Pedersen added. "But they contribute to the knowledge of how the sky was in former times."