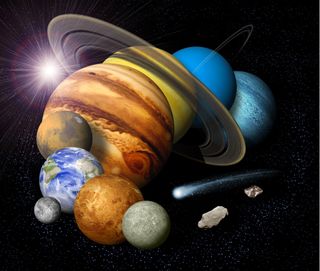 Scientists have confirmed, with amazing precision, Einstein's general theory of relativity. To do so, they looked at how each planet's elliptical orbit shifts over time.
(Image: © NASA)

Time after time, experiments have proved that Einstein's theory of general relativity, which describes the way gravity behaves, especially when dealing with high speeds and large masses. In the new study, physicists looked at gobs of data on planetary orbits to look for tiny anomalies that couldn't be explained by either Isaac Newton's theory of gravity — in which gravity is a force between objects that depends on their masses — or Einstein's general relativity theory, which says gravity is a warping of space-time itself.

And Einstein's theory holds up, once again. [8 Ways You Can See Einstein's Theory of Relativity in Real Life]

In the new test, an international team of scientists led by Aurelien Hees, a mathematician at Rhodes University in South Africa, looked for violations of the so-called Lorentz symmetry or Lorentz invariance, a key part of both the special and general theories of relativity. This principle says physical laws look the same regardless of your speed or orientation. For example, a scientist in a rocket moving in a straight line at a constant speed would see her experiments give the same results as they would if she were in a room on Earth — without looking outside, there would be no way to tell that she was zipping through the atmosphere in a rocket. (One can experience this on an airplane: absent the turbulence or vibration from the engines, you can't tell whether the plane — or you — are moving or not without a window).

One consequence of Lorentz symmetry is that gravity doesn't have a preferred direction. The Earth's gravity pulls on you in the same way whether you launch a rocket from Russia or the United States, from the North Pole or the South Pole. This doesn't refer to the differences because of the shape of the Earth, just the way gravity behaves — it always pulls toward the center of mass. [6 Weird Facts About Gravity]

Planetary orbits can be used to test for any violations of that symmetry. Right now, orbits are calculated using Newton's laws with a correction for general relativity. If Lorentz symmetry is violated, then the orbits will be different — their paths will be off by a measurable amount.

Those same orbits have been used to show that general relativity is correct. Back in 1859, astronomers noticed the orbit of Mercury was changing its orientation over time — a process called precession. All the planets go around the sun in ellipses rather than perfect circles, and the long axis of the ellipse slowly turns as the planets tug on each other. But Mercury's orbit was moving faster than Newton's equations predicted, even when one accounted for the slight pull from all of the other planets. The difference was small — only a hundredth of a degree every century — but it was there.

At the time, some scientists predicted that another planet (dubbed Vulcan) must reside inside Mercury's orbit. Nobody found Vulcan, though, so it was clear that something was wrong. In 1915, Einstein solved that problem, without the need for the hypothetical planet. General relativity was able to account for that tiny difference from Newton's laws.

To look for a violation of Lorentz symmetry, Hees' team perused data and analyses from years of observations of the distances between planets and the moon as measured by space probes, ground-based observatories and laser-ranging experiments, the latter from the Intégrateur Numérique Planétaire de l'Observatoire de Paris (INPOP). Of particular interest was how each planet's elliptical orbit shifts over time.

Orbits around the sun (or the moon's trek around the Earth) are all tilted a bit relative to Earth's orbit. The point where the planet crosses Earth's orbit from south to north is called the ascending node. Hees and his team looked at the angle between the point where the planet makes its closest approach to the sun and the ascending node. That angle changes by small amounts as each planet gets tugged by the gravity of other planets.

This is the same type of observation that revealed the discrepancy in Mercury's orbit in the 19th century, and many groups of scientists have sought to detect the even tinier effects of general relativity on other planets, such as Venus, Mars, Jupiter, Saturn and even Earth. Now, scientists can account for general relativity and add the slight corrections to Newton's laws of motion. [10 Strange Facts About Mercury]

Hees' team used all that data to figure out just how precise Einstein's theory is, and to determine where to look for any violations. If there was any violation of Lorentz symmetry, then the shapes of the ellipses that describe the planets' orbits, called eccentricities, should change. In addition, the orbital inclinations — the "tilt" relative to Earth's orbit — should change in ways that aren't accounted for by Newton's theory with corrections for general relativity.

To quantify the difference between the current predictions of general relativity and the actual observations, physicists use numbers called Standard Model Extension coefficients, or SMEs, which should be zero if relativity and Newton's laws account for all of each planet's motions.

The SMEs weren't necessarily zero, though they were really small, with ranges from 10^-9 (one in a billion) to 10^-12 (one in a trillion), which means they agree with Einstein's laws to at least one part in 10,000 to one part in 100,000. The important thing, Hees noted, is that the range tells you what the limits are on any new physical theory.

"We don't really know where some deviation can appear," Hees told Live Science. "It has to be smaller than the current limits, though."

This may seem like a lot of work to test a theory that has been proven correct time and time again. However, such tests are important to finding new theories beyond general relativity that scientists are pretty sure exist.

"They've assembled decades of data of planetary motions to look for deviations from Lorentz invariance, a cornerstone of both [special and general relativity] and the Standard Model of particle physics," said Paul M. Sutter, an astrophysicist at Ohio State University who was not involved in the new study. "If someone finds evidence for this [violation], it's instant Nobel."

The research appeared in the Sept. 29 issue of the journal Physical Review D.