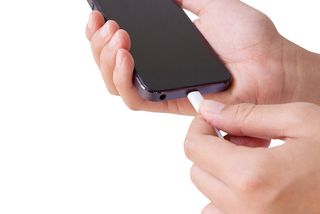 Cellphone batteries: Few things in the tech world are as derided as these small, but oh-so-necessary, components. The problem with phone batteries? They're always dying (and usually at the precise moment you wish they wouldn't).

Still, there are a few ways to delay the inevitable death of your phone's battery and one is remarkably simple — just get an additional battery and add it to the one you already have. That's the strategy Apple seems to be promoting with its newest product, the "smart" battery case for the iPhone 6 and 6s. Apple's new case contains a lithium-ion (Li-ion) battery that doubles the time you can use your phone before it goes kaput.

Sounds great, right? But there's a problem with Apple's newest product: It's kind of ugly. Gordon Gottsegen at Wired said the case makes it look like the iPhone has a "strange-looking growth on its backside." Lauren Goode at The Verge said it looks like an iPod that swallowed an iPhone. But to be fair, Apple's isn't the only battery case that's bulky. As Chris Davies at Slash Gear pointed out, the popular Mophie Juice Pack Air for iPhone 6 and 6s is just as ungainly as Apple's smart battery case. [9 Odd Ways Your Tech Devices May Injure You]

It seems that, if you want to keep your iPhone looking lean, you'll have to forgo the battery case for now. But are there other ways to extend your battery life that don't involve adding bulk to your phone? Yes, there is, said Paul Shearing, a chemical engineer at the University College London in the United Kingdom.

Closing down apps that aren't in use and turning off GPS or Wi-Fi services when you don't need them — these actions are "remarkably beneficial" when it comes to conserving battery life, Shearing told Live Science. And there are a few other steps you can take to save your phone's juice, as well.

Your phone uses a lot of power just keeping your apps up-to-date. Turning off the "background refresh" setting on these apps can save you some battery power. The same thing goes for notifications. If you don't need to be notified every time you get a like on a Facebook photo or receive a new email, then disable notifications for these apps. You might notice that your battery drains more slowly as a result, PC Mag reports. (Both these tricks can be done by going into "Settings" on your phone.)

But other than these quick power-saving fixes, there's not much you can do to prolong your battery's charge. Though the Internet is awash with advice on how to properly charge your phone to get it to hold a charge for longer, these suggestions are mostly "bogus," said Lloyd Gordon, chief electrical safety officer at Los Alamos National Laboratory in New Mexico.

For example, charging your phone in short bursts isn't going to help your battery keep a charge for longer, even though many sites claim this is the case, Gordon told Live Science. It's true that Li-ion batteries charge more quickly at certain points in the charging process than at others (e.g., charging it when it's 50 percent full may be more efficient than charging it when it's 30 percent full), but trying to plug your phone into the charger at exactly the right time isn’t worth the hassle, said Shearing, who called the difference in charge time "negligible."

And perhaps you've heard the old wives' tale that leaving your phone plugged into the charger overnight will somehow damage your battery? That isn't true either, according to Shearing.

"When the battery is full, it can't accept any more charge," Shearing said. Major cellphone manufacturers build "battery management systems" into their products to ensure that phone batteries don't charge indefinitely, which would be a serious problem if it were allowed to occur. These systems include a circuit board and accompanying software, which together serve as a sort of mini-computer that regulates your phone's battery.

These battery management systems not only ensure that your phone doesn't accept too much charge, they also make sure it doesn't release too much of its charge. Draining a Li-ion battery too much can damage the battery, leading to a "reduction in lifetime," said Shearing, who noted that modern cellphones turn themselves off before the battery drains beyond this point of no return.

But while today's cellphone battery management systems are smart, the batteries they manage are still big, bulky and not quite long-lasting enough for many users. This is the problem that companies like Apple are trying to solve with their battery-boosting phone cases.

"Even Apple has come to the conclusion that, if you want to have more battery, you're going to have to have a bigger package. And that's because [batteries] are already extremely energy dense. They're working extremely hard already," Shearing said.

If you're holding out for a cellphone with a super-long battery life, you may be waiting a while longer. Shearing said the next major energy storage breakthrough will likely be the emergence of lithium-air batteries that "breathe" out air as they charge. And air-breathing cellphones probably won't be available for purchase for at least 10 years, he said. So don't hold your breath.