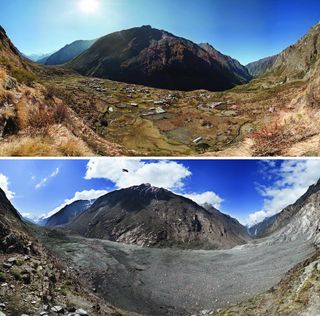 SAN FRANCISCO — The terrifying magnitude-7.8 Gorkha earthquake that rattled Nepal in April is nothing compared to the temblors scientists predict could happen in the future.

The shaking observed was "unusually gentle" given the magnitude of the earthquake, leading to far fewer landslides and glacial lake overflows than could have been seen, researchers said here today (Dec. 16) at the annual meeting of the American Geophysical Union.

"The situation could have been far, far worse," said Jeffrey Kargel, who was a co-author on one of two related papers published today in the journal Science and presented at the meeting. He and other scientists aren't sure exactly why the quake didn't wreak more havoc, but another temblor, even of similar magnitude, to hit the area may not be so forgiving, the researchers said.

And the next one may shake the earth even more: In the same rough region, there were at least three, bigger earthquakes during the medieval period whose impacts dwarfed those of the Gorkha temblor and are still altering the landscape today, according to the other study in Science. [See Photos of How the Nepal Earthquake Shifted Earth]

And past seismological assessments suggest the fault that ruptured still has energy equaling about 33 to 50 feet (10 to 15 meters) of motion that must be released, which could lead to even bigger earthquakes. The April 25 earthquake caused the fault at the boundary of the Indian and Asian plates to shift about 10 feet (3 m), according to the U.S. Geological Survey.

The April 25 Gorkha earthquake uplifted low-lying regions nearby and caused the highest reaches of the Himalayas, such as Mount Everest, to shrink.

All told, the temblor triggered a total of 4,312 landslides. One of the most catastrophic of those leveled a village in the Langtang Valley, killing about 350 people.

During that landslide, huge chunks of snow and ice sitting on the steep hillsides above the valley ripped off, free-falling for about 1,640 feet (500 m) before obliterating the town of Langtang below.

"The energy involved was roughly half that of the Hiroshima nuclear explosion, or more," Kargel said in a news briefing.

The air blast alone blew away large swaths of the village, including sturdy stone hotels, he said. In an area of hillsides stretching about a 0.6 miles (1 kilometer) around the landslide, the air blast snapped trees like matchsticks.

And yet, it could have been much, much worse. That landslide was actually a relatively small one compared with those seen in other catastrophic earthquakes. While most of the landslides originated at the ridge tops, some also arose in the low-lying sediments in flat valley bottoms, which is unusual (most originate on steep slopes), and some were triggered in the weeks after the earthquake, said Dan Shugar, a geohazard researcher at the University of Washington Tacoma, who is an author on the first Science paper.

Glacial lakes held strong as well. Despite many filled-to-the-brim, precariously perched glacial lakes that seemed poised to inundate nearby villages with the slightest jolt, most did not overtop their basins, the researchers said.

It's not clear why the quake didn't cause more damage, but it could be that it shook unusually strong rocks in the region, or that its location somehow mitigated the damage, the researchers speculated.

The rocks in the region revealed that in the medieval period, multiple massive quakes reshaped the landscape in much more dramatic ways. [The 10 Biggest Earthquakes in History]

For instance, Nepal's second biggest city, Pokhara, was built on the debris from landslides after three large quakes shook the central Himalayas between A.D. 1100 and A.D. 1344. Most of the landslide rubble Pokhara was built on came from Annapurna Massif, about 9,800 feet (3,000 m) above the city, said Oliver Korup, a geohazard researcher at the University of Potsdam in Germany, who was an author on the second Science paper.

In addition, much of this massive landslide rock didn't come from the nearby mountains but instead traveled from as far as 38 miles (60 km) away — likely the result of flooded lakes that carried huge amounts of rock with the deluge, Korup said.

"The material has really buried many of these river valleys beneath tens of meters of sediments," Korup said.

For instance, the rock fill lying below Pokhara would be enough to cover downtown San Francisco in 164 feet (50 m) of sediment, he added.

Though scientists are still piecing together the confusing story told in rocks and faults in the region, the historic earthquakes were about a magnitude 8.0 or greater. By contrast, the Gorkha earthquake was a "mere" magnitude 7.8, while the largest of the aftershocks was a magnitude 7.3.