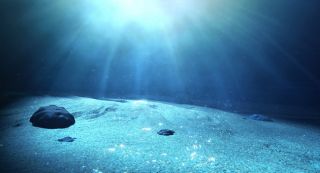 Attention, sea-loving explorers: There's a $7 million reason to get serious about your passion for ocean research right now.

“Our oceans cover two-thirds of our planet’s surface and are a crucial global source of food, energy, economic security and even the air we breathe, yet 95 percent of the deep sea remains a mystery to us,” Diamandis said yesterday at a keynote address during the American Geophysical Union Fall Meeting in San Francisco. Right now, researchers have better maps of Mars than they do of Earth's seafloor, he added. [Photo Timeline: How the Earth Formed]

To win the Ocean Discovery X Prize, researchers will need to develop an autonomous, relatively fast-moving vehicle that can be launched from the air or shoreline. The vehicle must be equipped with technologies that allow it to create high-resolution maps of the seafloor at depths of about 13,125 feet (4,000 meters). Throughout the competition, the underwater vehicles will also be tasked with creating high-res images of individual objects, including archeological, biological or geological features of the seafloor.

The teams that enter the competition won't just be competing for a chance to map the world's oceans; they'll also be going after some significant cash prizes. The winning team will take home $4 million, and whoever comes in second place will win $1 million. Additional monetary prizes will be awarded to the top 10 teams in the competition, and the National Oceanic and Atmospheric Administration (NOAA) is offering a $1 million bonus prize to teams that demonstrate technology that uses biological and chemical signals to "sniff out" objects in the ocean.

The NOAA portion of the prize is meant to spur the development of specific technologies that can help detect "sources of pollution, enable rapid response to leaks and spills, identify hydrothermal vents and methane seeps, as well as track marine life for scientific research and conservation efforts," Richard Spinrad, chief scientist at NOAA, said in a statement.

But don't expect the winners of this competition to be announced anytime soon. The three-year contest includes a nine-month registration window and allows 12 months for the initial development of the underwater vehicles. Once the registered teams have built their vehicles, they'll need to successfully complete two rounds of testing and judging by an expert panel before taking home any prizes.

The Shell Ocean Discovery X Prize is just one part of the X Prize Ocean Initiative, a series of five competitions that will span a 10-year period. Millions of dollars in prizes will be awarded to those who help X Prize reach its goal of addressing critical ocean challenges by 2020. In 2011, X Prize awarded the Wendy Schmidt Oil Cleanup X Challenge prize to a manufacturing team from the United States that developed technology for quickly cleaning up oil spills. And in July 2015, the Wendy Schmidt Ocean Health X Prize was awarded to another U.S. team for its development of ocean sensors that improve scientific understanding of how carbon dioxide emissions are affecting ocean acidification.

The first ever X Prize was awarded in 1996 to a team of researchers that built and launched a spacecraft capable of carrying three people to an altitude of 62.5 miles (100 kilometers) above Earth's surface, twice in two weeks. Virgin Galactic — the division of the Virgin Group tasked with making commercial space travel a reality — eventually acquired the technology that won the prize.

More information about the new Ocean Discovery X Prize can be found on the organization's website.