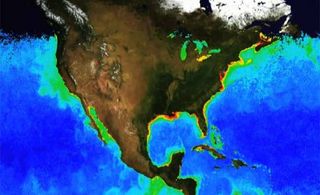 Frances Beinecke is the president of NRDC, served on the National Commission on the BP Deepwater Horizon Oil Spill and Offshore Drilling, and holds a leadership role in several environmental organizations. This Op-Ed was adapted from a post on the NRDC blog Switchboard. Beinecke contributed this article to LiveScience's Expert Voices: Op-Ed & Insights.

When I was a child, I spent hours collecting seashells near my parents' home on Cape Cod. I even gathered the clam shells after big family dinners. I still enjoy these summer pastimes, but a cloud has been cast over them. Ocean acidification is posing a new threat to shellfish, and marine industries are already seeing its troubling effects.

Mudflats in Maine have become acidic enough to kill young clams. Shellfish farms in the Pacific Northwest have experienced losses of 70 to 80 percent of oyster larvae as a result of acidification. And California free divers are worried about what acidification will do to sea urchins.

Acidification has major implications for our seas and coastal economies, but scientists are only beginning to understand it. Last week, those efforts got a giant boost: XPRIZE has announced the $2 million Wendy Schmidt Ocean Health XPRIZE for breakthroughs in acidification monitoring.

This prize is necessary to help society tackle what is sometimes called climate change's evil twin.

Every day, the ocean absorbs about a third of the carbon dioxide people produce from burning fossil fuels and clearing land. When carbon dioxide dissolves in the sea, it becomes more acidic, making it hard for creatures like oysters, mussels and coral to build shells. On average, the oceans have become 30 percent more acidic since the Industrial Revolution, but some coastal waters are already twice or three times as corrosive.

Bob Rheault of the East Coast Shellfish Growers Association is concerned about acidification, recently wondering,"Can we evolve quickly enough to allow my grandchildren to enjoy shellfish?" What a question to have to ask. Shellfish have been a part of American culture for hundreds years. Imagine if our families witness the end of that era. The people of the United States owe it to our children to restore ocean health.

The most important thing people can do is cut carbon pollution. President Barack Obama has instructed the U.S. Environmental Protection Agency to limit the carbon coming from power plants— America's largest source of global-warming emissions. Meanwhile, the best and brightest minds must track ocean acidification. Scientists have only been examining this problem for a decade, and they need more information to help coastal communities adapt to changing seas.

The new XPRIZE will enable researchers to collect that information and will inspire innovators from around the world to focus their talents on the challenge of measuring ocean acidification. Right now, existing technologies make it difficult and expensive to measure the ocean's chemistry. This keeps fisheries managers in the dark and blinds the public to some of the worst consequences of carbon pollution. Congress has failed to adequately fund programs that could help coastal communities cope with acidification, and the free market has not yet met the growing need for better ocean pH sensors.

The Wendy Schmidt Ocean Health XPRIZE will help fill the gap. The technology spurred by the prize will enable commercial fishermen to figure out what fisheries are most at risk and where to place new aquaculture facilities.

Wendy Schmidt's passion for the ocean has driven this wonderful initiative. Wendy, an NRDC trustee, is a great believer in people's infinite power to discover new solutions to the world's problems. A few years ago, she created the Wendy Schmidt Oil Cleanup XCHALLENGE to challenge engineers to find more effective ways to respond to oil spills in the ocean.

Oil spills are the visible dimension of our fossil-fuel addiction, while ocean acidification is the unseen one that is unfolding every day. This disaster is just as devastating as the oily sheen that dominated the news after the BP spill in the Gulf of Mexico, and I am so grateful to Wendy and XPRIZE for identifying acidification as the next big ocean priority the U.S. must address.

In the end, preparing for rapidly changing ocean waters will require the shared effort of everyone, from fishermen to scientists, government agencies and private companies. But today, XPRIZE is accelerating that effort by raising awareness and investing in solutions. To pre-register for the Wendy Schmidt Ocean Health XPRIZE, visit oceanhealth.XPRIZE.org.

This Op-Ed was adapted from "XPRIZE Challenges Innovators to Tackle Climate Change's Evil Twin: Ocean Acidification" on the NRDC blog Switchboard. Her most recent Op-Ed was "Arctic Drilling Risks Threaten Inupiat Traditions" The views expressed are those of the author and do not necessarily reflect the views of the publisher. This version of the article was originally published on LiveScience.