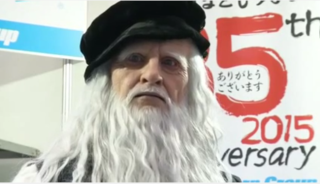 Leonardo da Vinci (or rather, a robot that looks a heck of a lot like the Renaissance painter and inventor) made an appearance at a robotics show in Japan last week.

The humanoid da Vinci bot was on display at the Robot Exhibition 2015 (iREX), a biannual convention that opened in Tokyo on Dec. 2. With its long white beard, bright blue eyes and pensive facial expressions, the da Vinci robot really does bear a striking resemblance to the man best known as the inventor of flying machines and painter of the Mona Lisa.

But the talking da Vinci machine was far from the only interesting robot at this year's iREX. One perfectly coifed, chatty robot appeared in a Reuters video from the exhibition. The girlishly styled bot is so lifelike that she might have an "uncanny valley" effect on some observers. In other words, her distinctly human tendencies, coupled with her robotic nature, might really creep you out. [The 6 Strangest Robots Ever Created]

Not all of the humanoid bots at iREX were eerie, however. Some of the most popular bots at the exhibition were developed by Japan's NEDO (New Energy and Industrial Technology Development Organization) to respond to natural disasters. These machines are built for usefulness, not for looks. The resourceful bots wowed the crowds at the convention when they climbed over obstacles and opened doors, according to a report by Reuters.

But some of the bots at this year's exhibition weren't built for work; they were built for fun. For example, a gangs of dancing bots, dressed up in French maid costumes, were on display from Japanese tech manufacturer DMM. Known as the Premaid AI "idol" robots, these groovy machines can be programmed to do just about any dance you like.

Another playful, egg-shaped bot from iREX can't dance (in fact, it can't move at all), but it's still fun to be around. The MJI ("more joyful innovation") robot has expressive eyes that react to your conversation, like an attentive friend. The little bot can also sync with your phone to give you the latest information about the weather, news and other notifications, according to the Verge. But if you really want to chat with a robot, there's a bot for that, too. Takara Tomy's Omnibot Ohanas can have conversations with humans about various topics, including famous athletes.

And just as some of the bots from last week's exhibit were distinctly human in shape, others were built to look more like other animals. An underwater jellyfish robot from Canadian tech developer Raytron made an appearance at the show. So did ACM-R5H, a snakelike robot from Japan's HiBot robotics company. The slithering bot can swim like a pro and is agile enough to fit into confined spaces. The snake bot could one day be put to use performing inspections or doing other tasks that require expertise in slithering (like entering fallen buildings after an earthquake).

Also pretty cool? A giant, bright yellow robotic arm from industrial robot manufacturer Fanuc. At the convention, the bot lifted an entire vehicle into the air as though it were a matchbox car.