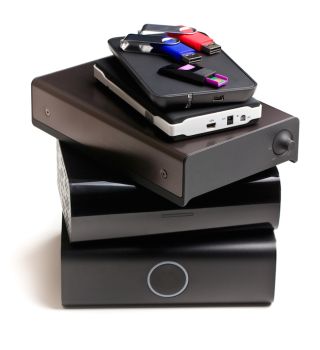 A man who takes thousands of digital pictures weekly and spends hours every day organizing the photos on his computer could have a condition that, until now, has never been described in medical literature. The patient might have "digital hoarding disorder," according to the authors of a recent report on the man's case.

The 47-year-old man lives in the Netherlands, and doesn't only collect digital photos; he collects physical objects, too. He has been diagnosed with tactile hoarding disorder, which means he holds onto objects ranging from old bicycle parts to scraps of useless paper. The clutter fills his Amsterdam apartment and prevents him from inviting anyone over to visit, according to the report, which was published Oct. 8 in the journal BMJ Case Reports.

But much of the man's hoarding occurs in the digital realm — he stores tens of thousands of photographs on his computer, and the four hard drives he has purchased.

His doctors think his tendency to hold onto so many digital files is a problem, according to the report. Dealing with all of these electronic files keeps the man from doing other things, like cleaning his home, going outside or sleeping, they wrote. [Hypersex to Hoarding: 7 New Psychological Disorders]

"He enjoyed taking the photos. However, the processing and saving of the digital pictures caused suffering and distress," Dr. Martine van Bennekom, a psychiatry resident at the Academic Medical Center in the Netherlands who treated the man and is the lead author of the report, told Live Science.

The man's inability to let go of digital things — and the fact that this inability affected his life in a negative way — led van Bennekom and her co-authors to suggest that digital hoarding shouldbe "classified as a subtype of hoarding disorder," which would make it possible for doctors to diagnose and treat digital hoarding as a mental health condition.

Right now, digital hoarding isn't an established condition like hoarding disorder, which is included in the the DSM-5, the reference manual that doctors use to diagnose mental disorders. But this distinctly modern kind of hoarding is something that a lot of people are talking about. The pseudo condition even has its own Wikipedia page.

In the case report, van Bennekom and her colleagues suggest making digital hoarding an official disorder. They say this would make the disorder easier to detect.

Yet, not all mental health experts agree. Making digital hoarding a disorder would be "premature," said David Tolin, a clinical psychologist and director of the anxiety disorders center at the Connecticut mental health center, The Institute of Living.

The new case report is based on the experiences of just one person — a person who has tactile hoarding disorder.

And there's another problem with labeling the hoarding of digital stuff as a mental disorder, Tolin noted. Patients who hoard physical objects, like photographs, are sometimes encouraged by their doctors to go digital. Converting photographs into files gives patients more living space in their cluttered homes, he said.

If digital hoarding became an official disorder, it's unclear whether doctors would still want to recommend such measures to patients. This question and many others should be answered before digital hoarding makes its way into the diagnostic guidebooks, Tolin said. [5 Controversial Mental Health Treatments]

Tolin said he agrees with van Bennekom that people who feel distressed by their abundance of digital possessions are, in fact, hoarders. Feeling distressed or being impaired by too much stuff is what makes hoarding hoarding.

"Lots of people have quirky behaviors, but we don't go around calling those disorders," Tolin said. "If somebody was just hoarding digital objects, but their house was relatively clean," then they may be impaired by their behavior, but they may also just have a quirk about saving digital stuff, he said.

The patient in the case report was truly impaired by his digital hoarding, but other people might not be impaired by similar behaviors, said Larry Rosen, a psychology professor at California State University, Dominguez Hills.

For example, if you have 7,000 unread emails in your inbox, but you don't give a hoot, then you're not a hoarder, said Rosen, whose research focuses on the relationship between mental health and technology.

People who are concerned they may have a problem should ask themselves whether all their virtual stuff is causing them anxiety, he said. Those who have anxiety might find it helpful to make a plan to deal with their digital clutter, or find someone who can help, he said.

But if you're just a little overwhelmed by the 7,000 unread emails in your inbox, and are concerned about that the time it would take to sort through them all, then Rosen recommends an easy way to reduce that anxiety-inducing number.

"Go on and trick your email system into calling them all 'read.' And then it'll say zero. There goes the stimulus that creates the anxiety," he said.