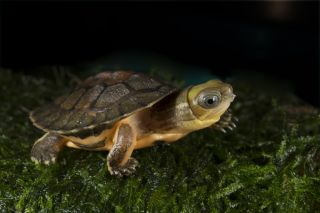 Turtles have been around for nearly 200 million years. They watched the dinosaurs go extinct and saw human beings take their place. But today, many turtle species are threatened with their own demise: More than half of the world's approximately 341 species of freshwater turtles and tortoises are on the brink of extinction. Some species have even become "functionally extinct," which means that though there may be some individuals left in the wild, the population is too small to be self-sustaining.

The factors contributing to these declines are numerous and span the globe: pollution, hunting, habitat destruction and overcollection for the pet trade. In addition, wildlife trafficking is causing the eradication of more and more species worldwide. Much of the world's turtle trade is driven by demand from China, specifically for human consumption and for use in traditional medicines.

Chinese yellow-headed box turtles were once plentiful in the highlands of the Anhui province of eastern China. Their population collapsed due to human consumption, use in traditional medicine, pollution, habitat loss and the pet trade. When these turtles hatch they are tiny, weighing about 10 grams.

Egyptian tortoises have disappeared from their namesake nation due to loss of habitat and collection for the pet trade. This is the second-smallest species of tortoise in the world, and they do not reach sexual maturity until they are 10 to 20 years old.

The natural range of the McCord's box turtle is mostly undiscovered. The species is predominantly known from its availability in Chinese markets.

Mary River turtles are endangered, short-necked turtles with a remarkable adaptation: They perform "cloacal breathing." In most species, the cloaca (or the turtle's "back side") is the posterior opening that serves as the only orifice for waste and reproduction. However, the Mary River turtle can also use its cloaca to absorb oxygen directly from water.

Roti Island snake-necked turtles live in the swamps and lakes found on the tiny island of Roti in Indonesia. Their necks fold sideways rather than straight back when they pull into their shells. These turtles have been over-collected for the pet trade and are critically endangered.

Madagascar's radiated tortoises have all but disappeared from their island home due to habitat loss, hunting for their meat, and collection for the pet trade. The females lay from three to 12 eggs, which resemble Ping-Pong balls. The hatchlings have beautiful, roundish shells and, at 1.5 inches, are miniature versions of their 35-pound parents. [Shell Shock: 25 Turtle Species in Terrible Trouble]

Trade in East Asia markets has decimated their population, which is found only on the remote Indonesian island that gives this turtle its name.

Read more stories on turtles, tortoises and other wildlife in Wild View by Avishai Shuter and Julie Larsen Maher.