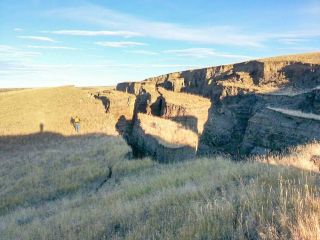 A gaping crack the length of six football fields that opened up in a matter of one to two weeks in northern Wyoming is likely the product of a landslide, geologists said.

A hunter looking for antelope discovered the jagged gash near Ten Sleep, a town in rural Wyoming by the Bighorn Mountains, on Oct. 1, reported 9NEWS, a local CBS channel in Wyoming. With an estimated size of 750 yards long by 50 yards across (686 meters by 46 meters), the open fracture wasn't exactly something the hunter could traverse.

"I was stunned," Randy Becker, the hunter with SNS Outfitter and Guides who found the crack, told CBS Denver. "The magnitude of this shift in earth is dramatic. It blows you away to see it." [7 Ways the Earth Changes in the Blink of an Eye]

A landslide is the likeliest explanation for the ragged feature, said Seth Wittke, a geologic manager with the Wyoming State Geological Survey, who said he has seen photos of the zipperlike split, but has yet to visit it in person.

"It sounds like there are some springs in the area, so it could be possible that [the landslide] is groundwater related," Wittke told Live Science. "A lot of landslides typically are related to some sort of subsurface water, so it's not really that much of a surprise."

An engineer from Riverton, Wyoming, had a similar interpretation, said a post on SNS Outfitter and Guides' Facebook page.

"Apparently, a wet spring lubricated across a cap rock [hard rock layered over weak rock]," SNS Outfitter and Guides wrote in the post. "Then, a small spring on either side caused the bottom to slide out."

It's unclear why the landslide happened when it did, but experts dismissed several explanations. Wyoming did have a particularly wet spring, but there's no evidence the extra rainfall contributed to the landslide, Wittke said.

Moreover, the landslide isn't near any oil drilling or fracking sites, which have been linked to sinkholes andearthquakes, and no earthquakes have been reported nearby that could have caused the landslide, Wittke added.

The geologist said he hopes to visit the giant gash before the snowy season makes travel difficult. But the size of the landslide, characterized as medium to large, isn't that unique.

"They happen fairly often in the state," he said. Over the years, "the [Geological] Survey has over 40,000 landslides mapped in the state."

The crack isn't near any commercial or residential establishments, but it could pose a danger to curious adventurers, Wittke said. He advised people to stay away from the gash, as the ground may be unstable if it's still settling, he said.

"If you walk around on the edges of the landslide and they were to catastrophically fail, you would have nowhere to go," Wittke said. "That's the danger of it."