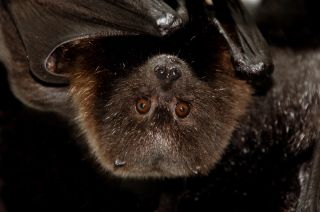 Vampire folklore tells of winged creatures with fangs that prey on the living for their blood under the veil of darkness. While it is true that some bats live in caves, come out at dusk and drink blood, they are vital to our ecosystems. As their numbers continue to dwindle due to persecution, habitat loss and disease, they need our help — not our superstition.

Bats are classified in the order Chiroptera, derived from the Greek words "cheir" for hand and "pteron," meaning wing. They are further split into two suborders: Megachiroptera, or megabats, and microchiroptera, or microbats.

Megabats are larger bats (as their name implies) and their diet consists of fruit and pollen. These fruit-eating bats travel long distances in search of food, feeding in one place and then spreading seeds in another through their droppings — contributing in this way to the regrowth of rainforests. Megabats also play an important role in pollinating many types of fruit plants. They work the pollinator shift at dawn and dusk — a role that insects and birds hold during the day.

Microbats eat a wide variety of things, including fish, insects and blood. Each species usually specializes in one dining option from that menu. These smaller bats play an important role in eliminating harmful pests that would otherwise need to be controlled by pesticides. They are adapted to living at night and use echolocation to "see" in the dark, producing ultrasonic calls and listening to their echoes. This sixth sense is used for orientation and finding prey.

The world's only flying mammals, bats are the longest-lived for their size, with life spans of up to 40 years. Many of these creatures bear only one young per year. Thus, their populations are slow to recover from losses.

A number of threats have caused the number of bats to plummet. They have become victims of pesticides that are used to control the insects upon which they feed, as over their lifetimes these pollutants build up to harmful levels. Industrial activities like wind farms can cause bat mortality from collisions, especially during migrations, as can the large flame of oil refineries. And bats are susceptible to disease. White-Nose Syndrome (WNS), a fungal disease of hibernating bats that was first discovered in 2006, has had a major impact. The fungus that grows on their noses and other exposed flesh on their bodies is fatal, and can wipe out up to 99 percent of bats in single colony.

Biologists are looking for ways to conserve bats by conducting research to understand their ecological needs. "Bats are facing a major crisis," said Wildlife Conservation Society scientist Heidi Kretser. "Millions are gone, but state public health and wildlife agencies have an opportunity now to work together to communicate a conservation message."

Below is a gallery of bats, showing that they are more adorable than terrifying. (Photos by Julie Larsen Maher ©WCS.)

Rodrigues flying foxes, Pteropus rodricensis, are critically endangered megabats that come from a single place, the island of Rodrigues, in the western Indian Ocean.

Ecuadorian sac-winged bats, Balantiopteryx infusca, are microbats ranging from west Ecuador and Colombia. They are endangered due to habitat loss and population fragmentation. They are social bats that live in colonies and feed on insects in the rainforest.

Common vampire bats, Desmodus rotundus, are warm-weather microbats from South America that live and hunt in groups. They are cave dwellers, and are persecuted due to an unfounded fear of rabies: They are not major carriers of the disease.

Rodrigues flying foxes roost in patches of forest and are threatened by weather conditions. Cyclones blow through their landscape, devastating the habitat of these fruit bats.

Pale spear-nosed bats, Phyllostomus discolor, are microbats that roost in hollow trees and caves. They are omnivorous and use echolocation to size up objects as potential meals.

Checking out the view

Overhunting is causing a decline in the forest homes of Madagascan rousette bats, and in Madagascar they are now in near-threatened conservation status.

Read more in Wild View in the posts including "A Rare Bat Gets a Second Chance" and "Flying Fox of the Forest,” and others by Ricardo Antunes and Julie Larsen Maher.