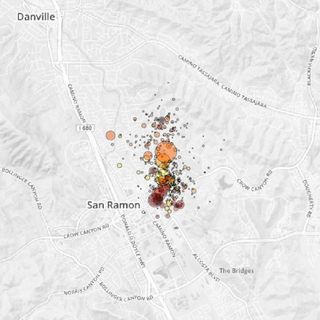 A map of earthquake locations in the San Ramon swarm.
(Image: © USGS/ComCat catalog)

A whopping 408 earthquakes have hit San Ramon, California, in the past two weeks, including 11 in one 24-hour stretch.

This record-breaking earthquake swarm is nothing to fear, however, according to the U.S. Geological Survey (USGS). Periods of tectonic unrest are common in the area and probably don't presage a larger quake, the USGS said.

Most of the quakes affecting this Bay Area city are tiny. The one that kicked off the swarm at 8:50 a.m. Pacific Time on Oct. 13 was a mere magnitude 0.8. People don't usually feel earthquakes until they reach a magnitude of 2.5; quakes between magnitude 2.5 and 5.4 can be felt but rarely cause much damage. Most of the quakes occur at depths of 5 to 6 miles (8 to 9.7 kilometers). [The 10 Biggest Earthquakes in History]

The quakes are hitting on the north end of the Pleasanton Fault in the Calaveras Fault zone, according to the USGS. Swarms of small earthquakes are common in this fault system. In fact, in 1990, a swarm of 351 earthquakes struck over a 42-day period. The largest quake in that swarm was a magnitude 4.2, a level unlikely to cause serious damage.

The most recent earthquake swarm on this fault system was a 30-day stretch in 2003, over which 120 temblors hit a few miles south of the current quakes. Again, the largest quake was a magnitude 4.2.

"Based on the characteristics of the historical earthquake swarms in this region, the current swarm may continue for several more weeks and is unlikely to be a foreshock to a larger quake," USGS officials said. "East Bay residents may feel shaking from more earthquakes in the magnitude 3-4 range until the swarm abates."

The chance of a serious quake (of magnitude 6.7 or above) hitting the San Ramon area is a mere 8 percent over the next 30 years, the agency estimates. In comparison, the chance of a quake that size occurring somewhere in the Bay Area over the next three decades is 72 percent.

The message, according to the USGS, is to not panic over the current swarm, but to be prepared with an earthquake safety plan for the long term.