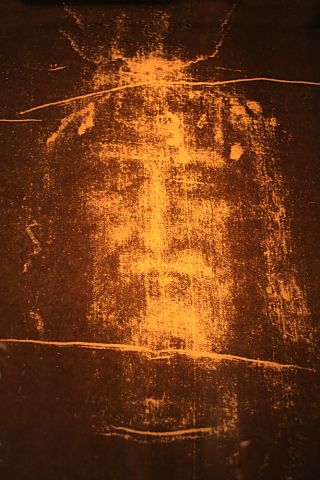 A portion of the Shroud of Turin.
(Image: © I. Pilon / Shutterstock.com )

Is it a medieval fake or a relic of Jesus Christ? A new analysis of DNA from the Shroud of Turin reveals that people from all over the world have touched the venerated garment.

"Individuals from different ethnic groups and geographical locations came into contact with the Shroud [of Turin] either in Europe (France and Turin) or directly in their own lands of origin (Europe, northeast Africa, Caucasus, Anatolia, Middle East and India)," study lead author Gianni Barcaccia, a geneticist at the University of Padua in Italy and lead author of the new study describing the DNA analysis, said in an email. "We cannot say anything more on its origin."

The new findings don't rule out either the notion that the long strip of linen is a medieval forgery or that it's the true burial shroud of Jesus Christ, the researchers said.

On its face, the Shroud of Turin is an unassuming piece of twill cloth that bears traces of blood and a darkened imprint of a man's body. Though the Catholic Church has never taken an official stance on the object's authenticity, tens of thousands flock to Turin, Italy, every year to get a glimpse of the object, believing that it wrapped the bruised and bleeding body of Jesus Christ after his crucifixion. [Religious Mysteries: 8 Alleged Relics of Jesus]

According to legend, the shroud was secretly carried from Judea in A.D. 30 or 33, and was housed in Edessa, Turkey, and Constantinople (the name for Istanbul before the Ottomans took over) for centuries. After crusaders sacked Constantinople in A.D. 1204, the cloth was smuggled to safety in Athens, Greece, where it stayed until A.D. 1225.

However, the Catholic Church only officially recorded its existence in A.D. 1353, when it showed up in a tiny church in Lirey, France. Centuries later, in the 1980s, radiocarbon dating, which measures the rate at which different isotopes of the carbon atoms decay, suggested the shroud was made between A.D. 1260 and A.D. 1390, lending credence to the notion that it was an elaborate fake created in the Middle Ages. (Isotopes are forms of an element with a different number of neutrons.)

But critics argued that the researchers used patched-up portions of the cloth to date the samples, which could have been much younger than the rest of the garment.

What's more, the Gospel of Matthew notes that "the earth shook, the rocks split and the tombs broke open" after Jesus was crucified. So geologists have argued that an earthquake at Jesus' death could have released a burst of neutrons. The neutron burst not only would have thrown off the radiocarbon dating but also would have led to the darkened imprint on the shroud.

In the current study, Barcaccia and his colleagues analyzed dust that they vacuumed from the shroud that contained traces of both plant and human DNA.

The plant DNA came from all over the world, the researchers reported Oct. 5 in the journal Scientific Reports. European spruce trees; Mediterranean clovers, ryegrasses and plantains; North American black locust trees; and rare East Asian pear and plum trees all left their mark on the cloth.

The team also sequenced the human mitochondrial DNA (DNA passed from mother to child) found in dust from the shroud. The genetic lineage, or haplotype, of the DNA snippets suggested that people ranging from North African Berbers to East Africans to inhabitants of China touched the garment.

Still, the strongest genetic signals seemed to come from areas in and around the Middle East and the Caucasus — not far from where Jesus was buried, and consistent with the early folklore surrounding the object. [The 10 Most Controversial Miracles]

"One of the most abundant human mitochondrial haplotypes, among those discovered on the shroud, is still very rare in western Europe, and it is typical of the Druze community, an ethnic group that has some origin in Egypt and that lives mainly in restricted areas between Syria, Jordan, Lebanon, Israel and Palestine," Barcaccia told Live Science in an email.

The oldest DNA snippets (which tend to be shorter because DNA breaks down over time) are found in many places on the shroud, and come from genetic lineages typically found only in India, Barcaccia said. That finding suggests that the shroud was manufactured in India before somehow making its way to Europe, as Indians had little contact with Europeans at the time of its origin.

"In my opinion, it is hard to believe that in the past centuries, in a historical interval spanning the medieval period, different subjects — such as priests, monks or nuns, as well [as] devotees and other subjects of Indian ancestry — have had the possibility to come in contact with the shroud in France and/or Turin," Barcaccia said.

But the new results don't settle questions about the shroud's authenticity, said Hugh Farey, editor of the British Society of the Turin Shroud newsletter. [Who Was Jesus, the Man?]

As far as the plant DNA goes, "they've done a good job, and they've identified a number of species that mean, broadly speaking, nothing at all," Farey told Live Science.

The new study suffers from the same issues that made past studies of pollen on the shroud unreliable, said Renée Enevold, a geoscientist at the Moesgaard Museum in Denmark who has analyzed ancient pollen in the past.

"The plant DNA could be from many sources, and there is no way of finding the right source," Enevold told Live Science in an email. "Also, the sub-genus level of taxon that has been reached is not near enough to the species level that is needed to determine the area of origin for each plant."

The researchers also mistakenly relied on an interpretative method that is used to analyze thousands of grains of pollen in a lake, she said. In that environment, the conditions that led to the deposition of pollen — rain and wind, for instance — are known. In contrast, there are so many unknowns when it comes to describing how dust settled onto the shroud.

"It is very bold and completely wrong to use the same interpretational approach on the presence of DNA — or just a few pollen grains, for that matter — on a shroud that has been man-handled for decades," Enevold said.

Given that the cloth was publicly displayed for centuries, it's not surprising that so many people touched it, Farey added. "Apart from ruling out the United States of America as the source for the shroud, it leaves just about everything else open," Farey said.

As for the possible Indian manufacture, it's just as likely that Indian DNA got onto the object during its 20th-century testing, he said. To truly determine where the cloth was manufactured, the researchers would need to analyze the DNA from the flax seeds used to make the linen shroud, which was not done, he added.

Still, Farey said he's about 40 percent convinced the shroud is authentic and about 60 percent inclined to believe it is a forgery.

"There is a pretty substantial amount of evidence on both sides," Farey said. "So the proper thing to do is to maintain an open mind at the moment."

However, using DNA analysis and more sophisticated scientific techniques could ultimately settle the question, Farey said. For instance, geologists can now determine the origin of rock with incredible precision, by analyzing its ratio of isotopes of certain elements. If researchers can one day figure out how to test the isotopes in the limestone dust found on the shroud, they could say with greater certainty whether the shroud was ever in Jerusalem, he said.

Editor's Note: This story was edited to note that the crusaders, not the Ottomans, sacked Constantinople in A.D. 1204. The Ottomans conquered the city in A.D. 1453.