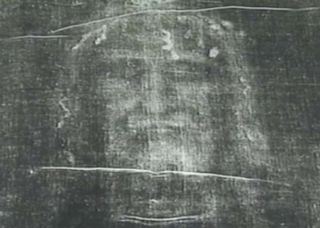 The Shroud of Turin cloth bears the apparent imprints of a man, crucified like Jesus in the gospel narratives. While some Christians believe it to be a holy cloth, scientific studies have found the cloth dates from the 14th century. Image credit: CNN/video still frame captured by LiveScience.

The Shroud of Turin is perhaps the most famous religious artifact in the world, believed by many to be the burial cloth of Jesus. It is a rectangular linen cloth about 15 feet long and four feet wide that bears the image of a man's body. '

On display at the Cathedral of Saint John the Baptist in Turin, Italy, it is one of many shrouds claimed over the centuries to be the one true burial cloth of Jesus, products of a lucrative trade in fake religious relics.

The Bible itself casts doubt on the Shroud of Turin's authenticity, according to Shroud researcher Joe Nickell.

"The shroud contradicts the Gospel of John, which describes multiple cloths (including a separate 'napkin' over the face), as well as 'an hundred pound weight' of burial spicesnot a trace of which appears on the cloth," Nickell wrote in "Relics of the Christ" (The University Press of Kentucky, 2007).

Furthermore, there is evidence that the person who created the shroud confessed.

Nickell notes that a document by "Bishop Pierre d'Arcis claimed that the shroud had been 'cunningly painted,' a fact 'attested by the artist who painted it.'" And not only did the Bishop claim he knew that the shroud was a fake in 1390, but even Pope Clement acknowledged it as a forgery.

Perhaps most damning, carbon dating of the Shroud of Turin has revealed that it does not date to the time of Christ but instead to the 14th century, when it first appeared in the historical record. If the Shroud really is the most important holy relic in history, it seems that no one knew it existed for 1,300 years.

Between the forger's confession, the carbon dating to the 14th century (and lack of any records of it before then) and the contradiction of the Bible's accounts, the historical and scientific evidence suggest that the Shroud of Turinlike the many other shrouds before itis probably not the real burial shroud of Jesus.

The Catholic Church does not officially endorse the shroud as authentic, though many of the faithful including Pope Benedict still claim that it is. Future tests on the shroud's fibers could conclusively confirm or refute evidence of fraud, but Church officials have refused further analysis. For many, the Shroud of Turin will remain a matter of faith.