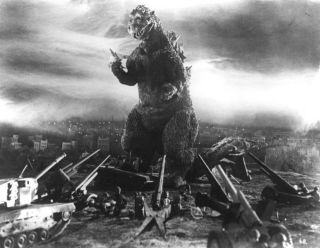 DALLAS — Godzilla, the fictional, Tokyo-destroying sea monster, is actually a dinosaur dreamed up by the film's producer, Tomoyuki Tanaka, who let his mind wander during a flight back to Japan across the Pacific Ocean.

The 1954 film was a hit. Now, 30 movies later, people still flock to see the radioactive giant in theaters — likely because Godzilla reminds them of their childhood love of dinosaurs, said William Tsutsui, a professor of history and president of Hendrix College in Arkansas, and author of "Godzilla On My Mind: 50 Years of the King of Monsters" (St. Martin's Griffin, 2004).

Tsutsui spoke about Godzilla's historical roots to a crowded room here at the 75th annual Society of Vertebrate Paleontology conference Tuesday (Oct. 13). [Rumor or Reality: The Creatures of Cryptozoology]

"Now is as good a time as any to reflect on Godzilla," Tsutsui said. "What’s the deal with this overgrown radioactive lizard that seems to love nothing better than destroying Tokyo? How did his global icon emerge from the [imagination] of postwar Japan? … Why do fans like myself still enjoy watching an actor in a rubber suit stomping the heck out of toy cities?"

Moreover, is Godzilla a dinosaur, and does that help explain its lasting popularity?

"Godzilla" emerged during Hollywood's heyday of science-fiction horror films. "King Kong" was re-released in Japan in 1952. Other films, such as "Them!" in which radioactive ants attack mankind, and "the Deadly Mantis," which tells of a gigantic prehistoric preying mantis striking the U.S. military, were "inspired by mounting Cold War tensions and middle-class America's countless anxieties and neuroses of the time," Tsutsui said. [Making Monsters: Images of Spooky Special Effects]

"Godzilla" is also a monster movie influenced by superpower politics and atomic-age fears, he said. In March 1954, a Japanese fishing vessel strayed into a U.S. nuclear bomb-testing area near the Marshall Islands. The crew received huge amounts of radiation, and one person died. Some of the irradiated tuna made it to market, and the Japanese media called it "the latest atomic bombing of Japan," following the Hiroshima and Nagasaki bombings of 1945, Tsutsui said.

The movie has some eerie parallels. In the original November 1954 film, Americans zap Godzilla during an atomic bomb test. The beast then ravages Tokyo before a scientist develops a secret weapon to destroy it.

The original movie was "serious and somber," Tsutsui said. "It was full of implicit criticism of the United States and unfettered nuclear testing."

Many Japanese moviegoers left the theater in tears, but they also called it cathartic and therapeutic, he said. The movie rewrote the end of the war: Instead of using a secret weapon to destroy Japan, scientists in the movie deploy it to save Tokyo, Tsutsui said.

However, Godzilla's creators took a different perspective. They said Godzilla represented the souls of the Japanese soldiers killed during the war, "yearning to come home and be acknowledged by a nation that seemed eager to forget them," Tsutsui said.

Tanaka called the movie character Gojira — a nickname given to a hapless man at the movie studio that combines gorira (gorilla) and kujira (whale), Tsutsui said. Americans simply called it "Godzilla."

A heavily edited "Godzilla, King of the Monsters" charmed American audiences in 1956, and the franchise took off, with Godzilla reflecting the changing demographics in Japan.

"By the 1960s, the Japanese economy was booming and people were optimistic, increasingly affluent, and not so interested in seeing their nation destroyed by giant monsters," Tsutsui said. "So the movies became more lighthearted and Godzilla was repositioned as a defender of Japan rather than as a vengeful monster intent on destroying the country."

(Interestingly, many of the filmmakers were from the pornographic film industry, because the studio figured "that if there wasn't action every 60 seconds, the audience would leave the theater," Tsutsui said.)

Godzilla was originally a dinosaur, although that isn't explicit in later movies. In the first movie, a scientist calls Godzilla a transitional creature "somewhere between the marine reptiles and the evolving terrestrial animals," Tsutsui said.

The 1954 film crew used dinosaur illustrations from Life magazine to help them design Godzilla. But they had to give it larger hips, since it was actually a latex suit worn by an actor, Tsutsui said. Furthermore, many of the creatures Godzilla fights in the later movies also look like dinosaurs, Tsutsui said.

Perhaps Godzilla is so popular because it brings back childhood recollections, when people felt the joy and wonder of learning about dinosaurs.

"Godzilla brings back memories of childhood, of an age when one could innocently enjoy movies with latex monsters beating on each other," Tsutsui said.

Godzilla also fascinated paleontologists. The terrible lizard captured the imagination of Ken Carpenter, the director and curator of paleontology at Utah State University, who named a new genus of bipedal dinosaur Gojirasaurus in 1997. A number of scientific papers also explore the movie-screen beast: "Godzilla from a zoological perspective" (Mathematical Geology, 2000) and "The Science of Godzilla" (Tetrapod Zoology, 2007).

"Godzilla is the outrageous guy that breaks all the rules and gets away with it; the walking disaster who leaves a trail of devastation behind him," Tsutsui said. "[It] inspires not just fear and loathing, but also admiration, awe and an odd tingle of delight."