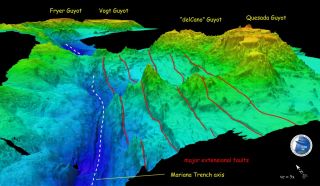 Where should a giant monster with radioactive breath hide from humans hell-bent on its destruction? Why, the world's deepest ocean trench, of course!

And that's how a bit of real-world science won a brief cameo during "Godzilla." Warner Bros. licensed an image of the Mariana Trench from scientists at the University of New Hampshire (UNH), who surveyed the deep seafloor near Guam and the Mariana Islands in 2010.

"I was very surprised, and then pleased, that one of our images was to appear in the new movie," James Gardner, a UNH scientist who led the survey, said in a statement. [Dive Deep: Virtual Tour of the Mariana Trench]

The Mariana Trench marks the collision between two of Earth's massive tectonic plates. The Pacific Plate descends beneath the Philippine Plate, and a deep canyon forms where the two plates smash together.

And if the terrible lizard is radiation-hardened, he can probably withstand the pressure at the bottom of the Mariana Trench, which is more than 8 tons per square inch, or the equivalent of 50 jumbo jets piled on top of a person, according to a description by NASA's Goddard Space Flight Center website. Water temperatures hover just above freezing.

The conditions aren't hospitable for most life, though expeditions have discovered bizarre creatures such as giant single-celled "amoebas" made of silicon dioxide, the main component of glass. (called xenophyophores).

But is the Mariana Trench the best place for Godzilla to hide from humans? Probably not. Just as humans are drawn to Mount Everest, the world's highest peak, the Earth's deepest point draws an ever-growing number of curiosity seekers. Director James Cameron dove to the bottom on his own dime in 2012. Scary monsters might be better off concealing themselves in the Kuril Trench offshore of Russia instead — cold, choppy seas here send most explorers elsewhere.