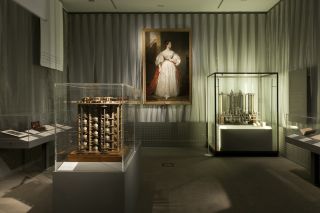 A century before the first computer was developed, an Englishwoman named Ada Lovelace laid the theoretical groundwork for an all-purpose device that could solve a host of mathematically-based problems. Widely credited as being the first-ever computer programmer, Lovelace's pioneering work is explored in a new exhibit that opens today (Oct. 13) at the Science Museum, London, in the United Kingdom.

The date of the exhibit's opening wasn’t chosen at random. Tech geeks around the world are commemorating Lovelace's achievements today, as they do every year in mid-October — a day known as Ada Lovelace Day. The new exhibit features models of early calculating machines, detailed notes and handwritten letters that tell the story of Lovelace's groundbreaking ideas.

When Lovelace was a teenager, she visited the home of Charles Babbage, a mathematician and mechanical engineer, who was working on his Difference Engine, a calculating machine designed to solve complicated mathematical problems. Lovelace took a keen interest in the machine and in mathematics more generally, according to Tilly Blyth, lead curator of the Ada Lovelace exhibition, who said in a statement that the subject both "fascinated and enthralled" the young Lovelace.

Her early fascination with mathematics and the complex machines used to solve equations eventually led her to take a much closer look at the principles behind another machine that Babbage proposed to build, the Analytical Engine. In 1842, Lovelace translated into English a detailed account of this machine, as described by the Italian mathematician (and later Prime Minister of Italy) Luigi Menabrea.

Lovelace's translation of Menabrea's account was published alongside her extensive notes about the Analytical Engine and its potential uses. Included in her notes was an algorithm that the machine could use to calculate Bernoulli numbers (a set of rational numbers often used in number theory, or arithmetic). Many consider Lovelace's algorithm to be the first computer code ever created, because it was the first logical set of steps developed for use with a specific machine.

But in addition to coming up with the world's first computer code, Lovelace also foretold the coming of the computer age. Her notes on the Analytical Engine relay an important message: Complex mathematical machines can do a lot more than crunch numbers. She predicted that Babbage's contraption might solve any problem that could be expressed using logistical symbols — such as the creation of complex musical scores.

Lovelace's notes are on display at the new exhibit, as are a collection of her personal letters and several portraits of the Victorian-era computer programmer. Also on display are Babbage's intricate drawings of the Analytical Engine, as well as a part of this calculating machine (which was never fully built), as well as other inventions.

The Science Museum will host the Ada Lovelace exhibit until March 2016.