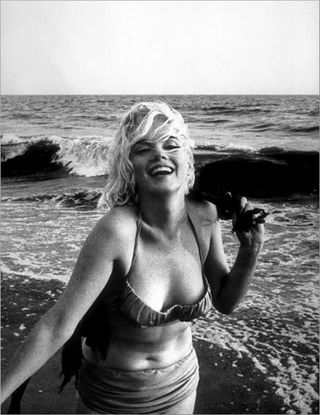 Marilyn Monroe was the first Playboy centerfold. The lad mag recently announced that it would not longer include nude centerfold pictures.
(Image: © George Barris, public domain)

Say goodbye to the most famous bunnies in the world.

Playboy Magazine announced yesterday (Oct. 12) that it was revamping its design. Among its changes: No longer will naked ladies grace the pages of the magazine. (Of course, you only read it for the articles anyway, right?)

"Playboy's great success was that it legitimized sexualized images in the context of good fiction, interesting articles and groundbreaking interviews," Kim Wallen, a psychologist at Emory University in Atlanta, Georgia, wrote in an email to Live Science. "Still, it would not have been able to sell these often-excellent features without including nude women, which was the reason a majority of men bought Playboy."

But ultimately, even the nude pictures weren't enough to hold readers. The magazine, which first exploded into public consciousness when it published nude shots of Marilyn Monroe in 1953, has been losing readers for years, according the Alliance for Audited Media., largely thanks to the rise of Internet pornography. With the click of a button, a smorgasbord of sexual options, from the violent and disturbing to the frankly weird, are instantly available. [Hot Stuff! 10 Unusual Sexual Fixations]

Along with eating, drinking and sleeping, sex is one of the most fundamental human drives. That means it activates ancient parts of the brain such as the limbic system, which also controls basic emotions such as fear and anger, said Joseph J. Plaud, a private, clinical forensic psychologist in Boston, Massachusetts, who has studied the effects of pornography.

When people look at sexual imagery, dopamine floods these brain regions, causing an intense feeling of pleasure. Over time, people come to associate those direct images (called reinforcers) with the pleasurable feelings. Anything associated with those images, including Playboy's trademark bunny image, could also prime people to seek out that positive rush. [6 (Other) Great Things Sex Can Do for You]

However, if that pleasure response gets triggered over and over — with frequent doses of Playboy or other sexually charged imagery — a person will need bigger hits to feel a response, Plaud said.

"The more you do and the greater degree of access, the more explicit [it is], you seem to need more and more," Plaud told Live Science.

The finding makes sense, in that people looking at pornography would be focusing on the sexually explicit image more than the fine details of the background of the image, the researchers speculated. A person who was scanning the horizon for potential threats would have trouble being aroused.

On the flip side, getting aroused requires feeling safe, and freedom from the need to look out for potential dangers, the researchers said.

"We're being flooded by an immense amount of very hard-core pornography, and it's a question [what effect it has]," Plaud said. "I think it may have very large implications in the future."