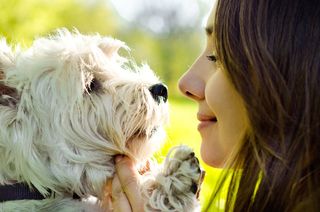 SAN DIEGO – People infected with the superbug methicillin-resistant staphylococcus aureus (MRSA) may pass the bacteria to their pets, a new study suggests.

What's more, MRSA may "hide" on pets, which might allow the animals to pass the bacteria back to their owners, although more studies are needed to confirm this, the researchers said.

Pets "may serve as a reservoir for ongoing transmission [of MRSA] in the household," said study co-author Dr. Stephanie Fritz, an assistant professor of pediatrics at Washington University School of Medicine in St. Louis, who presented the findings here at IDWeek2015, a meeting of several organizations focused on infectious diseases. [6 Superbugs to Watch Out For]

In the study, the researchers visited the homes of 49 children who had MRSA infections but were otherwise healthy. All of these children had a strain of MRSA that is known to affect people outside of hospitals, called "community-associated MRSA."

The researchers took samples from the families' cats and dogs, as well as from household surfaces, such as TV remotes and refrigerator door handles, to test for MRSA.

The study also found that the strains of MSRA on pets often matched the strains on the animals' owners. Nearly 90 percent of owners who let their MRSA-colonized pet sleep in bed with them also had MRSA on their skin, and in half of these cases, the person's strain matched their pet's strain.

Because pets aren't the natural hosts of MRSA, the researchers hypothesize that owners are passing the bacteria to their pets. It's likely "that the pets are acquiring the organism from the people, or their environment," Fritz said.

The researchers are now conducting a study that follows families over a two-year period to tease out exactly how pets acquire MRSA.

Doctors sometimes recommend that everyone living in the home with an MRSA patient undergo "decolonization," meaning that they use special soaps and creams to eradicate the bacteria from their skin. But even when this is done, about half of kids with MRSA will get infected again, Fritz said. It's possible that MRSA on pets may need to be addressed to better prevent recurrences.

There aren't any specific treatments for pets that have MRSA, but owners can frequently wash their hands, and have pets sleep in crates rather than in a bed with people. This may help the pets to naturally rid themselves of the bacteria, said study researcher Ryley Thompson, a clinical research assistant at Washington University School of Medicine.

In the past, some people have said that families may need to get rid of a pet if their child has MRSA. However, pets can be an important part of a family, "and having them could be beneficial" for psychological well-being, Thompson said. The researchers said they hope further studies will help determine if such action is warranted.