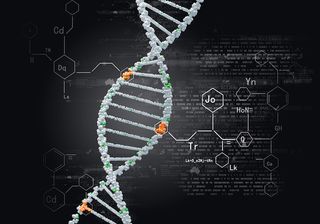 This year's Nobel Prize in chemistry was awarded to three scientists whose research helps to explain how human beings continue to thrive despite an invisible disadvantage — their totally unstable DNA.

Each of the three recipients of the prestigious award — Tomas Lindahl, Paul Modrich and Aziz Sancar —  has researched a different way that cells repair damaged DNA to safeguard genetic information. Their research not only helps to explain how human cells function, but it could also be used to develop new techniques for fighting diseases like cancer.

Human DNA can be damaged by sunlight (UV radiation), environmental toxins, carcinogenic substances (like those in cigarette smoke) and various other factors. But even if people aren't exposed to these harms, their DNA is still unstable, as cell genomes undergo spontaneous changes many times every day. In some cases, the constant division of cells inside the body can go haywire, resulting in defective copies of DNA. [Nobel Prize in Chemistry: 1901 – Present]

So how do humans go on living with all of these unpredictable strands of genetic material? Luckily for humankind, many molecular systems are in place inside the body that monitor and repair DNA, and keep total chaos at bay. The recipients of this year's Nobel Prize in chemistry discovered a few of those repair systems.

Tomas Lindahl, an emeritus scientist at the Francis Crick Institute in the United Kingdom, was one of the first scientists to ask an important question about DNA: How stable is it, really? In the 1970s, most scientists thought the answer to this question was straightforward — DNA is really stable. If it weren't stable, complex life on Earth (including human beings) would never have evolved in the first place.

But by experimenting with RNA (DNA's cousin) and, eventually, with DNA itself, Lindahl came to conclude that DNA isn't stable at all. In fact, it's constantly decaying. But he also discovered that there's a very important molecular mechanism at work that keeps DNA from collapsing completely: base excision repair, in which special enzymes remove damage in DNA.

Lindahl's breakthrough finding opened a whole new field of research into other ways that cells repair DNA. Aziz Sancar, a professor of biochemistry and biophysics at the University of North Carolina School of Medicine, discovered how cells repair DNA that's damaged by UV radiation. This molecular process, known as nucleotide excision repair, has led to a better understanding of why some people develop skin cancer — their nucleotide excision repair system is defective.

Paul Modrich, a professor of biochemistry at Duke University in North Carolina, discovered yet another molecular repair system called mismatched repair. During cell division, DNA replication mistakes can be made, leading to mismatched nucleotides (the pairs of bases that make up the rungs of the DNA "ladder"). These mismatches can lead to all kinds of cellular problems if left uncorrected (including certain cancers). But the mismatched repair mechanism corrects many of these bad pairings between nucleotides, reducing the error frequency during DNA replication by about a thousand times.

The research conducted by all three Nobel recipients has advanced the field of chemistry, and will help in the development of new tools for fighting diseases like cancer that affect human cells, representatives with the Nobel Foundation said in a statement.

The pioneering chemists will share the Nobel Prize amount of 8 million Swedish krona (about $960,000). You can read more about their research in biochemistry and genetics on the Nobel Prize website.