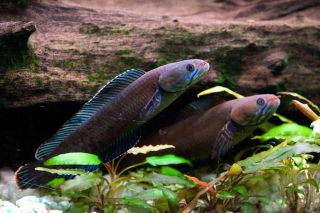 The recently discovered 'walking' snakehead fish can breathe air and survive for up to four days on land.
(Image: © © Henning Strack Hansen/Courtesy of WWF)

A monkey that sneezes whenever it rains, a fish that can survive out of water for four days and a venomous pit viper that is as lovely to look at as a piece of jewelry: These are just a few of the hundreds of new species discovered over the past few years in the diverse but highly threatened region of the east Himalayas.

Between 2009 and 2014, scientists discovered a total of 211 new species in the region, which stretches from central Nepal in the west to Myanmar in the east and includes the kingdom of Bhutan, as well as parts of northeast India and southern Tibet. An average of 34 new plant and animal species have been discovered annually in the region for the past six years, according to a newly released report from the World Wildlife Fund (WWF).

"I am excited that the region — home to a staggering number of species including some of the most charismatic fauna — continues to surprise the world with the nature and pace of species discovery," Ravi Singh, CEO of WWF-India and chair of the WWF Living Himalayas Initiative, said in a statement. [101 Animal Shots You'll Go Wild Over]

Among the most impressive new species included in the WWF's report is the sneezing monkey, which scientists nicknamed "Snubby." The unusual critter lives in a remote region in northern Myanmar, an area of rugged mountains and dense forests. Snubby has an upturned nose (hence its nickname) that has a tendency to collect rainwater, causing the black-and-white–hued monkey to sneeze when it rains. To avoid sneezing fits, the animals spend rainy days with their heads tucked between their knees, according to the WWF.

Northern Myanmar is also home to a tiny but terrifying new species of fish, Danionella dracula, which is the size of a minnow but has pointy fangs jutting out from its jaws. Another strange fish from the eastern Himalayas is Channa andrao, a snakehead fish with some truly strange qualities. The vibrant blue fish can "walk" on land by wriggling around on its belly. The fish's ability to breath air means it can live on land for a few days before returning to its freshwater habitat.

The only new reptile discovered in the eastern Himalayas since 2009, the bejeweled lance-headed pit viper (Protobothrops himalayansus), is also something special. Even if you don't like snakes, it's hard to deny this venomous serpent's beauty. The reptile's striking, diamondlike pattern and red-brown coloration give the snake a bejeweled quality.

All of these newly discovered species may sound like great news to anyone who appreciates biodiversity, but the WWF report also highlights the many threats facing the east Himalayas. Perhaps the most pressing is climate change, with the threat of habitat loss caused by deforestation, development and overgrazing not far behind.

Only 25 percent of the original habitats in the region remain intact, according to the WWF report, which found that rapid development has affected the vast majority of the region's lands.

"The eastern Himalayas is at a crossroads. Governments can decide whether to follow the current path towards fragile economies that do not fully account for environmental impacts, or take an alternative path towards greener, more sustainable economic development," Sami Tornikoski, leader of the WWF Living Himalayas Initiative, said in a statement.

In total, the Himalayas are home to an estimated 10,000 plant species and 300 mammal species. Nearly 1,000 different species of birds call the region home, along with hundreds of species of reptiles, amphibians and freshwater fish. In the new WWF report alone, more than 130 new species of plants were discovered in the area.

The challenge that organizations like the WWF face is to both conserve the species that scientists have already identified and protect a region that likely shelters even more creatures and plants waiting to be discovered.