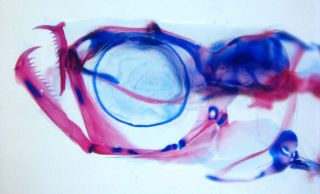 Image of the head of carp-like fish, Danionella dracula. Unlike the 3700 species in its group, the males have tooth-like structures, shown in this image of the stained fish.
(Image: © Natural History Museum in London)

The tiny freshwater fish finding may reveal more about how lost structures re-evolve, as well as how evolution can cause some species to mature early. Scientists named the fish Danionella dracula in honor of its large, tooth-like jaw structures.

"This fish is one of the most extraordinary vertebrates discovered in the last few decades," said Ralf Britz, a fish researcher at the Natural History Museum in London, UK.

Britz found the minnow in a stream in northern Myanmar, during a collecting trip. The transparent fish measures somewhat less than one inch long and represents one of the smallest fishes and vertebrates.

All other 3,700 species in the Cypriniform group lost their teeth about 50 million years ago. Biologically, D. dracula's redeveloped "teeth" represent outgrowths of the jaw bone, rather than truly re-evolved jaw teeth.

However, male and female members of this species don't boast the same bite – only the guys get the fanged face. Males also have larger pelvic fins and a forward-shifted anus and genital opening between those fins.

Males seem to use their fangs during territorial fights, when they nudge and "bite" each other, Britz told LiveScience. Their lower jaws can open to a wide degree and form an angle of 45-60 degrees with the main body axis.

D. dracula also stands out because of its "eternally young" physical development. The fish matures at an earlier developmental stage, with the result that its skeleton is missing more than 40 bones compared to its zebrafish relative.

"Its skeleton is for the most part that of a larval fish," Britz explained.

The small D. dracula is not alone – other Danionella species and related fish also share this unusual characteristic. Researchers call the phenomenon developmental truncation, and have debated what it means in evolutionary terms.