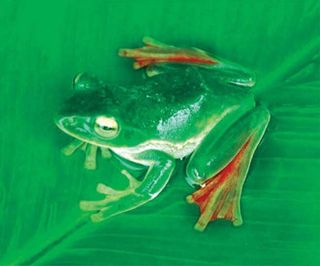 The world’s smallest deer and a flying frog (well, okay, it glides really well) are among a mother lode of new species discovered in the Himalayas, scientists announced this week.

Researchers made the discoveries after a decade-long exploration in remote mountain regions that stretch from parts of Bhutan and northeast India to the far north of Myanmar, Nepal, and the southern parts of the Tibet Autonomous Region (China).

In a report released by the World Wildlife Federation, researchers catalogued 244 previously undocumented plants, 16 amphibians, 16 reptiles, 14 fish, 2 birds, 2 mammals and at least 60 new invertebrates. In all, more than 350 new species were documented.

One notable finding is a bright green, red-footed tree frog (Rhacophorus suffry) that uses its webbed feet to glide through the air.

Researchers also uncovered the world’s oldest and smallest deer species, known as the miniature muntjac or “leaf deer.” The light brown creature was initially thought to be the young offspring of another species, but DNA tests confirmed it was a distinct and new species.

The Eastern Himalayas have long been a poorly surveyed region because of the rugged, inaccessible terrain. And although there are still large areas that haven’t been explored, climate change may already be endangering wildlife in the region, scientists say.

“The good news of this explosion in species discoveries is tempered by the increasing threats to the Himalayas’ cultural and biological diversity,” said Jon Miceler, Director of WWF’s Eastern Himalayas Program. “This rugged and remarkable landscape is already seeing direct, measurable impacts from climate change and risks being lost forever.”