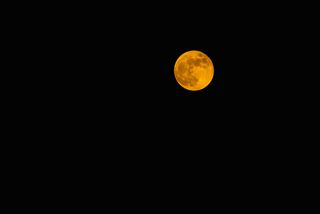 A full "supermoon" will pass precisely within Earth's shadow this Sunday (Sept. 27), creating a total lunar eclipse and bathing our planet's natural satellite in rusty hues. This eye-catching lunar eclipse will give night owls everywhere a reason to look up in wonder, but not everyone thinks this weekend's "blood moon" is a harmless celestial event. Some folks see it as a sign of impending doom.

One of those doomsayers is John Hagee, a Christian evangelical minister from San Antonio who has stirred up controversy with his sermons (and books and television broadcasts) about the alleged religious significance of the upcoming lunar eclipse. Hagee contends that this weekend's reddish moon could bring about the end of the world — an idea sometimes referred to as the "blood moon prophecy."

If you're shaking your head right now (either in agreement or utter disdain) consider this: The blood moon prophecy has a logical scientific explanation. [Doomsday: 9 Real Ways Earth Could End]

Superstitious beliefs and rare celestial events go hand in hand, said Allen Kerkeslager, an associate professor in the Department of Theology and Religious Studies at Saint Joseph's University in Philadelphia.

"'Why?' is almost irresistible to a brain with an evolutionary history that is simultaneously so similar to all other advanced mammals and yet just enough greater in the complexity of its memory systems to allow us to remember, reflect on and extrapolate meanings and intentions that go beyond what other mammals could conceive," Kerkeslager told Live Science in an email.

In other words, although your dog won't think Sunday's supermoon eclipse is happening for any particular reason, it's perfectly natural for you to wonder why it's occurring, and quite logical that some people (like Hagee) attribute some kind of meaning to the event.

Humans' tendency to believe that everything has some kind of intention or purpose is one of the reasons humanity didn't die off long ago, according to cognitive scientists, some of whom call this tendency the "hypersensitive agency detecting device," or HADD.Early humans who attributed "agency," or intention, to the things that might help them (a mate or a tasty-looking antelope, for instance) or things that might harm them (perhaps a lion or a guy with a club), were the ones who survived long enough to spread their genes on to the next generation, Kerkeslager explained.

When a rare phenomenon occurs, such as a blood moon total lunar eclipse, it's hard to resist what Kerkeslager calls the "evolutionary tendency to try to explain this as the result of some kind of intentional action by some personal agent."

But there could be another explanation for Hagee's need to attribute meaning to the supermoon eclipse. It's what Lorenzo DiTommaso, a professor of religion at Concordia University in Montreal, calls the "apocalyptic worldview."

The apocalyptic worldview has gained popularity in the past 40 to 50 years, DiTommaso told Live Science in 2011. Its rise is linked to the belief that the world's problems are too big for humans to solve, he said.

"Problems have become so big, with no solutions in sight, that we no longer see ourselves able, as human beings, to solve these problems," DiTommaso told Live Science. "From a biblical point of view, God is going to solve them. From other points of view, there has to be some sort of catastrophe."

There will be blood

What does Hagee think will happen when Earth passes between the sun and the moon Sunday night? [Supermoon Lunar Eclipse of 2015: Viewing Maps for the Blood Moon]

"A world-shaking event," he said in a promotional video for his book, "Four Blood Moons: Something is About to Change" (Worthy, 2013).

Just what the big event will be isn't yet known, Hagee said, but whatever it is, it is somehow connected to the so-called "end times," or the end of the world as prophesized in most major world religions. Also unknown is when, exactly, the event that brings about the end of the world will take place. Back in 2013, Hagee said the event could happen anytime between April 2014 and October 2015, and presumably, it hasn't happened yet.

The dates that Hagee mentioned more or less coincide with the eclipses of the 2014-2015 tetrad, a series of four consecutive lunar eclipses occurring at approximately six-month intervals. The first of these eclipses occurred in April 2014, and this weekend's eclipse closes out the series with a bang. It's the only one of the total eclipses to take place during a supermoon, which means the moon will be as close to Earth as it can get in its orbit, making it appear up to 14 percent larger in the night sky.

Knowing what really causes a total lunar eclipse is one way to fight the evolutionary tendency to read too far into what is really just a random event, Kerkeslager said. In fact, scientists can explain what's really going to happen on Sunday night fairly easily.

"A supermoon takes place whenever the full moon is near the perigee of the moon's orbit," said David Morrison, a senior scientist at NASA's Ames Research Center in Moffett Field, California. "Total lunar eclipses take place nearly once a year, on average," he told Live Science in an email.

There's also a scientific explanation for the "blood" part of the blood moon prophecy. When the Earth slides in front of the moon this weekend, sunlight will pass through Earth's atmosphere and bend toward the moon. Although most of this light will be blocked and scattered by Earth's atmosphere, red light may pass through, turning the moon crimson.

But other than these scientific explanations, the supermoon total lunar eclipse doesn't have any special meaning, Morrison said. That may come as a disappointment to those who hope this weekend's eclipse hints at some supernatural phenomenon. Still, you shouldn't let science deter your skywatching plans. Sunday's blood moon is sure to be "a beautiful sight," Morrison said.