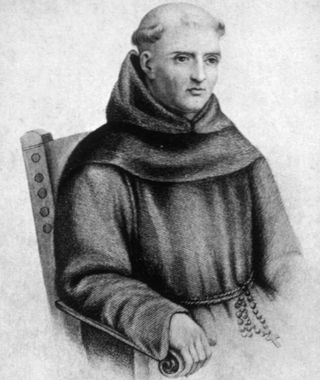 Pope Francis is set to canonize the Rev. Junípero Serra, a Franciscan priest who founded the first missions in the state of California, on Sept. 23. But the ceremony, which adds Serra to the Catholic Church's official roster of saints, has stirred controversy.

Several American Indian tribes oppose the canonization, saying that Serra was responsible for the enslavement and death of tens of thousands of indigenous tribespeople and the destruction of their culture. Some tribes are circulating petitions to protest the canonization. In addition, critics argue that Serra has only been credited with one miracle, rather than the two normally required to achieve official sainthood.

Though the church doesn't dispute the horrors that occurred under Serra's watch, it argues that he was a "man of his time" who loved the Native Americans as a father loves his children. [Holy Dream Team? The Most Notorious Catholic Saints]

Miquel Serra was born in 1713 on the Spanish island of Mallorca to a poor farming family. At age 17, he became a Franciscan monk and took the name Junípero. He eventually rose to prominence as a professor at the local university, said Robert Senkewicz, a professor of history at Santa Clara University in California, and the author of "Junípero Serra: California, Indians and the Transformation of a Missionary" (University of Oklahoma Press, 2015).

In 1750, Serra volunteered to serve in the missions in Mexico and spent 18 years as both a teacher and an itinerant preacher, before reaching Baja California in 1768.

In 1769, Serra journeyed northward into what is now California, which at the time formed the frontier of the Spanish Empire. For the next 15 years, he oversaw the establishment of nine missions along the California coast, Senkewicz said.

Pope John Paul II first beatified Serra in 1988. (Beatification is one of the last steps in the drawn-out process of becoming a saint, and it means that the Catholic Church believes the person is in heaven and can intercede with God on behalf of people who pray to him or her.) [The Top 10 Most Controversial Miracles]

The Vatican requires saints to have performed at least two miracles, typically medically unexplained recoveries from severe illnesses or injury where someone prayed exclusively to the potential saint. So far, the Vatican has only officially attributed one miracle to Serra — a nun in St. Louis, Missouri, who was cured of Lupus.

It's not clear why Pope Francis, of Argentina, chose to make Serra's sainthood official this year despite that missing miracle, but, he may be hoping to highlight the growing role of Latinos in the church, Senkewicz said.

Just like Saint Patrick, who brought Christianity to Ireland, Serra was the first to bring Catholicism to California.

"There's been a long tradition in Catholicism to venerate the person who first introduced Christianity or Catholicism into a particular area," Senkewicz told Live Science.

The church also tends to honor people who willingly volunteer for hardship and abandonment if it furthers the glory of God, Senkewicz said.

"He left a cushy job at the university in Mallorca, he took a lot of exhausting journeys and endured personal hardships," Senkewicz said.

Yet no one disputes that Serra was integral to a system that was, in some ways, disastrous for Native Americans. When the Spanish first arrived, 300,000 people from many tribal groups lived along the coasts. By the time of the Gold Rush (in the 1840s), the population of Native Americanshad dropped by half. Much of the decline was due to contact with Europeans, who brought smallpox, measles and other diseases that wiped out native populations.

"That first contact resulted in a tremendous demographic catastrophe for the native peoples," Senkewicz said.

In addition, the Spanish brought cows, horses and other grazers to the New World that destroyed the local ecosystem and trampled the fruits, vegetables and acorns the indigenous people ate, Senkewicz said.

With too little food to survive, many of these Indians may have sought shelter in the missions. This was not necessarily out of a desire to become Christian, but simply a matter of survival, Senkewicz said.

Beyond his role in the demographic catastrophe associated with the Spanish, Serra's personal decisions at the missions have come under fire. Like most Europeans of his day, he viewed the Indians as inferior.

"His relationship to the native people he was preaching to was openly and frankly paternalistic," Senkewicz said. "He regarded himself as a father to his children."

He also approved what many today would consider cruel punishments. At the time, Catholics viewed baptism as a lifetime commitment, meaning that once an indigenous person was baptized, he or she was held to Catholic rules — and therefore subject to the mission system's rules, Senkewicz said.

If the Native Americans ran away (perhaps due to starvation or mistreatment), or if they simply failed to return from a family visit in an allotted time, they would be flogged. "Fugitives" were rounded up, taken back in shackles and flogged by soldiers for many days, said Valentin Lopez, the chairman of the Amah Mutsun Tribal Band, which, like several Indian tribes, opposes the canonization.

"Serra himself approved that," Senkewicz said of the flogging.

Serra also focused much more on saving souls than on providing for the material and emotional well-being of the indigenous population, Lopez said.

"When the Indians died, he said, 'Praise be to God, now we have souls in heaven,'" Lopez told Live Science.

In Serra's mission system, missionaries would lock up the young and unmarried women in a dormitory at night, ostensibly to prevent soldiers from raping them, Senkewicz said. But deadly diseases like smallpox spread like wildfire in those cramped quarters, he added. [7 Devastating Infectious Diseases]

In addition, the practice of locking up the women did not actually prevent rape, but ensured it, Lopez contends.  For instance, in the mission in Monterey, "they would lock the women in there, but the soldiers had the key," Lopez told Live Science.

The persistent sexual assaults there led to many pregnancies and revolt among the indigenous men; it became such a problem at that particular mission that women had to be moved to a different location, Lopez said.

So far, several coastal Native American tribes have protested the canonization of  Serra. The Amah Mutsun has sent six letters to the Pope, laying out the case against Serra's canonization.

The tribe has not heard back from the Pope himself, though they have received a one-page letter from a high official in the Catholic Church, stating that the best historians investigated Serra's life and believe he is a saint, Lopez said.

Lopez thinks the upcoming canonization is a done deal, but he is hopeful that the church will one day take a second look at Serra's sainthood and revoke his status as a holy man. He is also hoping that California missions, and the church in general, will change the way they teach the history of the missions to students, he said.

Either way, his tribe will never accept Serra's sainthood.

"How can Pope Francis apologize for the sins committed against the indigenous people of the Americas and then not recognize Father Serra as a principal perpetrator, as a main perpetrator of those sins, crimes and offenses? It just does not make any sense at all to us," Lopez said.